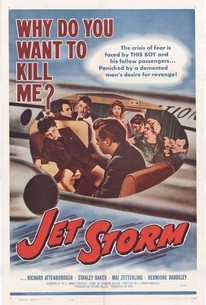 In this airborne disaster movie, a has-been brilliant scientist plants a bomb on a transatlantic jet to exact revenge upon a passenger whom he blames for his daughter's death -- she died during a plane crash. When the booby-trap is discovered and the passengers learn the motive for the scientists' actions, one of the passengers attempts to kill the man the scientist blames. A fight erupts and a window is shattered. The helpful passenger is sucked right out of the plane. Only when the scientist spies a child resembling his own lost daughter does he regain his humanity and disarm the bomb.

There are no critic reviews yet for Jet Storm. Keep checking Rotten Tomatoes for updates!

There are no featured reviews for Jet Storm at this time.