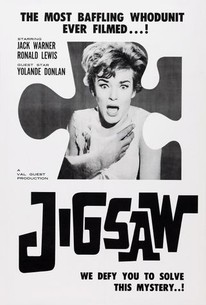 Jigsaw was based on Hilary Waugh's play Sleep Long My Love. The scene is Brighton: A woman's body is found in an isolated beach house. The local constabulary painstakingly assemble the "jigsaw" of random clues to reconstruct the woman's history and her last moments on earth, hoping this will lead them to the killer. Though essentially a mystery, the storyline hides nothing from the viewer; the clues are there if you're willing to pick up on them. At 107 minutes, the film is long but never tiresome. With so many films titled Jigsaw floating around the TV schedule, this 1961 production can be characterized as "the good Jigsaw." ~ Hal Erickson, Rovi

Marianne Stone
as Secretary
View All

There are no critic reviews yet for Jigsaw. Keep checking Rotten Tomatoes for updates!

There are no featured reviews for Jigsaw at this time.