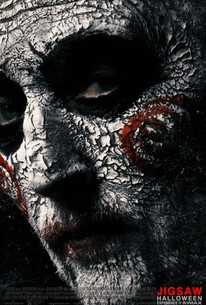 Critics Consensus: Jigsaw definitely won't win many converts to the Saw franchise, but for longtime fans, it should prove a respectably revolting -- if rarely scary -- diversion.

Critics Consensus: Jigsaw definitely won't win many converts to the Saw franchise, but for longtime fans, it should prove a respectably revolting -- if rarely scary -- diversion.

Critic Consensus: Jigsaw definitely won't win many converts to the Saw franchise, but for longtime fans, it should prove a respectably revolting -- if rarely scary -- diversion.

Thirteen years ago on Halloween weekend--SAW and the character of JIGSAW introduced the world to a new face of horror. For seven straight years "If it's Halloween it must be SAW" was a holiday tradition. This October 27, Lionsgate and Twisted Pictures proudly present JIGSAW! After a series of murders bearing all the markings of the Jigsaw killer, law enforcement find themselves chasing the ghost of a man dead for over a decade and embroiled in a new game that's only just begun. Is John Kramer back from the dead to remind the world to be grateful for the gift of life? Or is this a trap set by a killer with designs of their own?

The resulting Grand Guignol will please fans, although the gore is never as groundbreaking as the drowning in pig entrails and reserve bear traps of old.

A marginally better entry into the franchise.

Which brings us to "Jigsaw," which fails for very much the same reasons as "The Mummy" - It was made to launch a franchise rather than because it was actually about something.

Jigsaw isn't any less competent than the best of its predecessors, but it is little more than a capable rehash of things these films have done over and over.

All the Spierig brothers really bring to the material is cleaned-up camera work.

Seven years after Saw 3D, you would've expected a back-to-basics approach, but Jigsaw doubles down on the franchise's twisty storytelling. It feels too long, and it's only 90 minutes.

"The horror genre typically sees women as passive and helpless, the perfect victims. But when the roles are reversed, a female killer reclaims some power."

Though slicker and better-directed than any prior Saw film, Jigsaw's tame gore and rehashed plot twists make it mostly fall flat.

While Jigsaw is a perfectly serviceable entry in the Saw franchise, it doesn't bear scrutiny on its own.

Even though there are some chances taken, it just feels like another Saw movie and not something that is going to warrant a new generation of films.

It is a new demonstration that this franchise had already given everything it had to offer. [Full Review in Spanish]

'Jigsaw' is neither the most original movie, nor the most surprising, not even the bloodiest in the series. [Full Review in Spanish]

This is the eighth film of the franchise, and so anyone who has obviously seen the previous movies before jumping into this one will recognize all of the same tricks, plot devices and typical twists, but still this installment is entertaining and coherent enough not to be a disaster.

Jigsaw is back (or is he) in this latest installment of the Saw franchise. When a police informant claims that a new Jigsaw game is underway and bodies start coming in the police find themselves in a race against time to find out who's running the game and save the captives. Featuring Callum Keith Rennie, Laura Vandervoort, and Tobin Bell, the cast is pretty decent. However, the story kind of muddles up the chronology of the series (making it even more convoluted). Yet the mystery of who's the new Jigsaw, and the subsequent investigation are fairly intriguing. But what really counts in a Saw film are the traps, and a couple of these are rather clever (others are ridiculously complicated). A mediocre entry in the franchise, Jigsaw more or less follows the series formula and delivers what one would expect.

Time to stop making these. What was once a spectacular original piece of film is now a regurgitated tripe of a story.

The Saw franchise went downhill since the original back in 2004. Though it was assumed to have ended in 2010, another sequel has arrived seven years later. My main concern with this was the fact that it was probably going to end up being another film that's made for fans of violence and gore, who enjoy this series just for the traps and who makes it out alive. While Jigsaw is exactly that, there are many more layers to this film than I was expecting, making for a somewhat enjoyable viewing experience. I won't be recommending this movie to anyone who has never seen a previous installment, nor will I recommend it to those who have and have disliked it from the beginning. Jigsaw isn't going to win any new fans over, but in terms of popcorn horror entertainment, I think you can still do much worse than Jigsaw. It tries very hard to please hardcore fans, and I truly believe that it does so. This really isn't all that great of a movie, but let's dive into why it's better than it deserves to be. Like always, you follow the police as they try to solve the mystery of the ongoing puzzle so that they can try and save as many lives as possible. These films exist for their traps nowadays, but I have to give credit where credit is due and offer some applause to the neat little twists this movie pulls off throughout its final act. Like most of these sequels, the twists are too little and too late, but you can tell that the writers care about trying to give the audience a little more than just killing people in inventive ways. The characters throughout this film receive some backstory, but that's also the biggest issue I had with this movie as a whole. Looking back on it, I appreciate the fact that each of the characters throughout the core game was fleshed out more than I was expecting them to be, but they honestly make you hate every one of the players, which was a huge distraction from me, having absolutely nobody to root for. Yes, the majority of these movies are like that, but there was always someone to latch onto, hoping they would make it out alive. Instead, we receive a slew of characters that have all made terrible decisions in the past, forcing you to slightly be okay with what the killer is doing to them. Although I didn't care about any of the characters, Jigsaw found a way to win me over in the end, with a few very clever reveals, making the characters themselves seem less relevant anyway. You don't go into a Saw movie to see fleshed out characters, but when a movie can ground itself and invest you even in the slightest, points can be given for that. The character of John Kramer is the character who's fleshed out the most here, giving a small, but detailed level to the franchise itself, which was quite the surprise for me. The deaths themselves are pretty impressive in terms of being memorable because everything from Saw IV to Saw VII is a complete blur to me. I'll be remembering some of the set pieces when looking back on Jigsaw and that's easily more than I was able to say about most of the sequels that this franchise has offered through the years. There are nods to previous deaths throughout some of the games and there's definitely a reason behind that, which makes it worth waiting until the end. Overall, like I said, Jigsaw won't win over any new viewers, but fans of the franchise will be able to appreciate the cleverness that it has to offer when it ties itself into the timeline of the series. The dialogue is very generic, the story itself isn't anything you haven't already seen, and the characters are extremely forgettable. That being said, the traps are fun, the conclusion is satisfying for those who have followed the series from the beginning, and the spirit of the original is still present enough to warrant a recommendation for hardcore fans. Jigsaw works for what it sets out to achieve, but it's still the same old schtick. I had a fun time with this movie because I've seen every other film in the franchise and I still found this one of the best. It's really not that bad in retrospect.