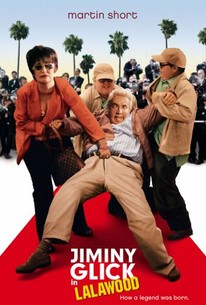 The world's most obnoxious celebrity talk-show host demonstrates how he rose to mediocrity in this pungent show business satire. Jiminy Glick (Martin Short) is a corpulent entertainment reporter who is looking to kick his career into high gear. Hoping to snag some celebrity interviews, Jiminy and his wife, Dixie (Jan Hooks), head north of the border to Canada, where Jiminy will attend the Toronto Film Festival. At first, Glick's attempts to ingratiate himself with stars and semi-stars are little short of disastrous, but after the easily star-struck reporter allows egocentric filmmaker Ben DiCarlo (Corey Pearson) to shamelessly self-promote his latest project on air, word gets around that Glick is an "easy interview," and his star begins to rise. However, Jiminy's good fortune is tempered by his unwitting involvement in a murder plot centered around booze-addled actress Miranda Coolidge (Elizabeth Perkins) and her wildly pretentious husband, Andre Devine (John Michael Higgins). Somewhere along the way, filmmaker David Lynch (played by Short) happens along, offering his theories on the controversial murder of Lana Turner's paramour Johnny Stompanato. A large number of Hollywood celebrities make cameo appearances in Jiminy Glick in La La Wood, including Steve Martin, Kevin Kline, Susan Sarandon, Whoopi Goldberg, Forest Whitaker, Kiefer Sutherland, and Sharon Stone.

Kiefer Sutherland
as Himself

Jake Gyllenhaal
as Himself

Sharon Stone
as Herself

Forest Whitaker
as Himself

Susan Sarandon
as Herself

Kurt Russell
as Himself

Steve Martin
as Himself

Rob Lowe
as Himself
View All

It didn't work. There's not a movie here.

What Short does not deserve -- and neither do we -- is a feature-length movie about Jiminy.

Glick is a one-note joke, and a flat note at that.

Within 40 minutes, though, you may realize you've had about as much fun as you're going to -- and that the movie is barely halfway done.

Good news, fans of Martin Short's porky celebrity interviewer, Jiminy Glick: There's a big-screen version of the short-lived Comedy Central series, and both of you will enjoy it.

Grafting a murder-mystery atop the celebrity interview spoof shtick, the film plays like a silly skit drawn out over an hour and a half.

There's a method to the madness after all.

Glick goes goofy as comedy sketch fails to fill up a feature film.

A very bumpy transition to the big screen realm of 90-minute storytelling.

This character does much better in 5 minute increments as opposed to a whole show - let alone a full-length movie! Martin Short is funny, but this is something that I have a short attention span for.

While I find this Martin Short character somewhat ammusing in small doses...I wasn't sure how he'd hold up through an entire film. But being a HUGE Jan Hooks fan and having heard about all of the David Lynch refrences and parodies involved I was intrigued enough to DVR it. There are several moments of true hilarity sprinkled throughout. Most of the really ammusing stuff (for me) usually involved either Jan Hooks or the David Lynch refrences. There are also several ammusing celebrity interviews and a few good "jabs" at Hollywood, which (as a film fan) you can't help but appreciate. But, for the most part this was mostly just silly, sophomoric, self-indulgent, fluff. Which is not an entirely bad thing (every now and again), provided you go into it knowing/expecting as much.

I like the Jiminy Glick character created by Martin Short. The skit becomes tired when stretched to movie length. It was funny how he was annoying all the celebrities with his overbearing personality. Good makeup effects on Martin Short. It was interesting how it was told in Hollywood expose style.

A fun movie. The interviews were the funniest. Also some good celebrity cameos.