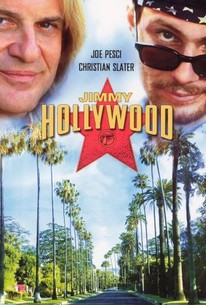 Clad in a blonde wig, Joe Pesci stars as the title character, a luckless actor. Unable to make it in the real showbiz world, Jimmy starts fantasizing about fame and fortune. His delusions eventually turn into reality when, through a fluke, Jimmy becomes known to one and all as "Jericho," a Robin Hood-like vigilante. Victoria Abril appears in a supporting role and the film's climax features a number of cameo performances.

Jason Beghe
as Detective No. 1

John Cothran Jr.
as Detective No. 2

Harrison Ford
as Himself

Rob Weiss
as Himself

Ralph Tabakin
as Fan in Hospital

Vinny Argiro
as Person in Deli

Andrew Bilgore
as Person in Deli

Lisa Passero
as Person in Deli

Richard McGregor
as Person in Deli

Reginald Ballard
as Person in Street

Ernie Banks
as Person in Street

Janet Denti
as Person in Street

Billy Salsberg
as Person in Street

Monica Welton
as Person in Street

You keep rooting for Jimmy Hollywood, because it has the bittersweet, unexpected flavors of a personal vision. It may not be Hollywood's idea of a socko entertainment, but, unlike many a hit, it follows you home.

Here are characters who might have really amounted to something, and we can see the movie dying right under their feet.

Levinson plays wryly on the way actors, even those without work, live their roles.

"something of a snooze, for the most part"

Joe Pesci is one of the most underrated comedic actors in all of Hollywood. The reason is simple, Cousin Vinny aside, he's never really been able to have success on his own. Pesci is usually in huge movies, paired with other big stars, and his rave reviews fall under the supporting actor tag. Jimmy Hollywood is yet another example of Joe Pesci going out on his own and striking out big time, which is quite surprising, when you consider who the Director of the film was. Jimmy Alto (Pesci) is a failing actor in Hollywood, he's done everything he can to make a name for himself, but he never has. One night a down and depressed Jimmy finds that his car has been broken into and it's the last straw. Along with him best friend, William (Christian Slater), Jimmy decides he's going to make a name for himself by cleaning up the streets of L.A., but that doesn't go exactly as planned either. The film is Written/Directed by Barry Levinson, who is usually known for his originality, but in this case, he's got nothing more than a trailer trash rip off of The Green Hornet. The parallels are really uncanny and the originality just isn't there. Even if a film has been done before, if it's good, I can still somewhat enjoy it, but that's another glaring problem with this film, it's not even that funny! Where are Joe Pesci's legendary profanity filled tirades? Where are the classic Home Alone type slapstick moments? Jimmy Hollywood just kind of is what it is, and what it is, is slow, predictable, and done. As a fan of Joe Pesci, I had to see it, but you don't, trust me, you're not missing anything.

Stick to playing mobsters and not some weak fool.