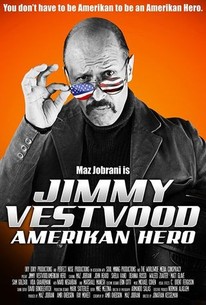 The Pink Panther meets Borat in this broad satire about a bumbling yet lovable Iranian immigrant who wins the Green Card lottery and moves to Los Angeles to pursue his dream of becoming an American hero. Jimmy Vestvood aspires to be a cool cop like his childhood idol, Steve McQueen in the movie Bullitt, but soon discovers that the best job he can get is as a security guard at a Persian grocery store. Through a series of comically fateful events, Jimmy's naiveté is exploited when a corrupt arms dealer hires him as a private investigator. Framed as a terrorist by the fear-mongering Kox News, Jimmy is unwittingly embroiled in a conspiracy to start World War III. With the help of his seventh cousin, Jimmy must save the day and avert the imminent war while keeping his overprotective mother in the dark. At a time when tensions between the East and the West are at a boiling point, "Jimmy Vestvood" playfully skewers American preconceptions of the Middle East and breaks new ground through its depiction of the first hero of Middle-Eastern descent in an American comedy.

Vida Ghahremani
as Maman
View All

In the style of Borat, director Jonathan Kesselman and cowriters Jobrani and Amir Ohebsion use raunchy, puerile humor to jab at American prejudices toward the Middle East.

Teetering precariously between satire and base humor, "Jimmy Vestvood" squanders opportunities for both.

Maz Jobrani's clowning is a salve for our troubling times.

Sheila Vand steals Jimmy Vestvood: Amerikan Hero as the vivacious Leila. After the smoldering, dark-eyed performance as the chador-wearing vampire in A Girl Walks Home Alone at Night, it turns out a girl also has fantastic comedic chops.

Bold, raunchy and biting, Jimmy Vestvood is one of the most outrageously funny comedies in years.

The satire is well-balanced and, more often than not, the jokes go over like gangbusters. With its humorous cultural lens, this movie should be a career-changing moment for Jobrani.

There are no featured audience reviews yet. Click the link below to see what others say about Jimmy Vestvood: Amerikan Hero!