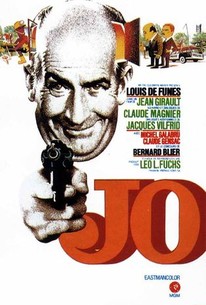 In this characteristic French farce, Louis De Funes in the role of Antoine spoofs the 1959 American classic black comedy, Gazebo. In Jo, De Funes is being investigated by the police because his name was on a list kept by a missing blackmailer who is presumed to be dead. Antoine has good reason to know, as he was there when the fellow died; in the moment he almost managed to shoot the man, someone else kills him. He is stuck with the body, and he keeps having to move it while the police are watching him. Fortunately for him, they are somewhat inept. ~ Clarke Fountain, Rovi

Yvonne Clech
as Grunder
View All

Critic Reviews for Jo (The Gazebo)

There are no critic reviews yet for Jo (The Gazebo). Keep checking Rotten Tomatoes for updates!

There are no featured reviews for Jo (The Gazebo) at this time.