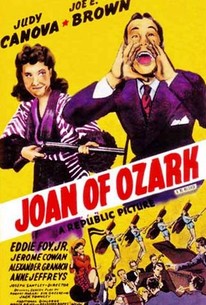 An Ozark woman goes out quail hunting one day, shoots a bird, discovers that it is a Nazi carrier pigeon, turns it over to the FBI, and becomes a national hero in this comedy. When the Nazi spy who sent the message learns that the sharpshooter has been crowned "No. 1 Patriot," he throws a fit. His operation is fronted by a New York nightclub. When he learns that an agent wants to bring the woman to New York to sing, he immediately offers to hire her. Mayhem ensues. Songs include: "The Lady From Lockheed," "Backwoods Barbecue," and "Wabash Blues."

Horace B. Carpenter
as Mountaineer

William Worth
as Clem

Charles Williams
as Representative
View All

Critic Reviews for Joan of Ozark

One of the funniest movies that we've seen in years. [Full Review in Spanish]

There are no featured reviews for Joan of Ozark at this time.