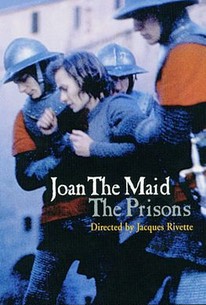 Jacques Rivette directed this richly detailed six-hour drama based on the story of Joan of Arc. In Part one, "Les Batailles," Jeanne the Maid (Sandrine Bonnaire) leaves her childhood home in Domremy after hearing what she is sure was the voice of God. She believes that she can help lead France to victory on the battlefield, and she persuades Charles, dauphin of France (Andre Marcon) to allow her to guide his troops. Part two, "Les Prisons," concerns the sad aftermath of Jeanne's defeat at Orleans. Jeanne is sent to prison, where in two separate trials she is tried for heresy and impersonating a man, with both her life and the sanctity of her mortal body at stake. A four-hour version, with each of the two parts trimmed down to two hours, is also available.

Sandrine Bonnaire
as Joan of Arc

Reginald Huguenin
as Colet of Vienne

Austere and handsome, propelled by an unadorned but magnetic performance by Sandrine Bonnaire.

Trying to describe the profound effect of [the film] is akin to concretely clarifying the potency and the impact of Henry James' prose. It can't be done; you just know when you're in it and when you're with it.

For those who are into French history...knock yourselves out--this set is good enough to rent at least. But as a film, it falls short and the presentation can't buoy it up.

A film that unites pain and pleasure in its demand for sustained attention.

Stripped of much of the incident that one would expect from an expansive biopic, but still remarkably satisfying, Rivette's two-film epic finds a psychological realism that's only enhanced by his unorthodox approach.

There are no featured reviews for Joan the Maid 2: The Prisons (Jeanne la Pucelle II - Les prisons) at this time.