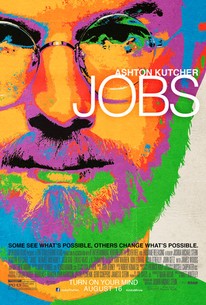 Critics Consensus: An ambitious but skin-deep portrait of an influential, complex figure, Jobs often has the feel of an over-sentimentalized made-for-TV biopic.

Critics Consensus: An ambitious but skin-deep portrait of an influential, complex figure, Jobs often has the feel of an over-sentimentalized made-for-TV biopic.

Critic Consensus: An ambitious but skin-deep portrait of an influential, complex figure, Jobs often has the feel of an over-sentimentalized made-for-TV biopic.

It only takes one person to start a revolution. The extraordinary story of Steve Jobs, the original innovator and ground-breaking entrepreneur who let nothing stand in the way of greatness. The film tells the epic and turbulent story of Jobs as he blazed a trail that changed technology -- and the world - forever. (c) Official Site

Cody Chappel
as Student At Lounge

Christopher Curry
as Board Member #1

Alan Purwin
as Pilot
View All

Now Streaming: Ride Along and The Secret Life of Walter Mitty
Parental Guidance: Frozen, Plus Red 2, Jobs and Getaway
Critics Consensus: Kick-Ass 2 Misses the Target; Lee Daniels’ The Butler is Moving and Well-Acted

A Steve Jobs biopic steeped in the mediocrity its subject despised.

Too often the audience is taken out of the scene with thoughts of" Hey, isn't that Ashton Kutcher?" simply because the portrayal comes off too contrived.

Jobs' remarkable life and persistently prickly personality are simply too complicated and his roller-coaster ride to the top of the personal-computing business is simply too crammed with improbable side trips and switchbacks to distill into 128 minutes.

It's an entirely wooden and bland representation of the tech icon, but for Apple devotees, it'll still have an appeal as an informative biopic.

It's a film whose plea to the audience resembles Jobs' appeal to the crowd in that iPod-unveiling scene: "Believe this is important and exciting," it asks, "because I say so."

The irony is that a man who treasured innovation and sleek, stylish design should be the subject of a film that's so bland and bloated.

One has the distinct feeling that Jobs himself would have been particularly unimpressed with Jobs the movie.

The film's major moving parts are damaged, effectively crashing the machine. Send this one back to the factory.

It's just passable, which would not have passed Jobs' own standards.

This dichotomy between what the film insists is Jobs at his best, and what we the audience see as Jobs at his arguable worst undermines the overall message and what we are supposed to take away from the movie.

Deborah Krieger
I on the Arts

So impressed with its subject that it leaves precious little time to explore the imperfect man behind the icon.

Jobs presents a fascinating story of how Jobs overcomes corporate backbiting and channels his own tendency toward obsession to build arguably the most innovative company of the last decade.

Actually, kind of dull. I was interested to see this one, but I found it patchy and not detailed enough. Particularly in his personal life it jumps around an awful lot. Ashton does an okay job. I'm not his biggest fan, but he pulls it off, particularly in his later years, would actually not have recognized him. He manages to tone the ham right down, thankfully. It's an okay movie. One to watch once and forget about.

This is quite possibly the most pretentious, and yet most likely truthful, depiction of Steve Jobs. There's definitely a rushed quality to the entire production, since this film came out shortly after Jobs' death, but it still feels like a legitimate bio-pic. Still, its lack of vision shows in its lame performances. The beginning of the film shows a mellow, advantageous Jobs, who doesn't wear shoes and is offered rainbow colored tabs of acid in a country field where he watches the stars. He's a sullen genius who won't get a college degree and yet hangs around Reed College, learning calligraphy and philosophy, which of course makes him a hipster's dream date. As the story speeds along, this sweet faced portrayal morphs, and we meet the contentious Jobs: the obsessive man who used everyone who loved him in order to climb the ladder and become the huge prick he would eventually become. He doesn't give any respect to Apple's founding members, he doesn't acknowledge his daughter, and he acts like everyone around him are idiots. To the movie's credit, that is not the afterglow portrayal of the wunderkind Steve Jobs that everyone was expecting. Though there is that negative view, he is also shown as a genius, smarter than everyone around him, including his own staff. He is also shown to be smarter than his entire board, who only seem to want to make money rather than follow their delusional founder down the rabbit hole. The beginning, which should have been the end, is a flash forward to the Jobs we know now. In the end, we still haven't gotten to that point, and so we end with this ham-fisted version of Jobs, who only seems to care about himself even after a film that tries to show he changed. Though I give applause for the way things were handled, the film was still structured poorly, and everything about this production was pure ham.

At some levels, it works and would have worked, but it fails in the certain cliches that befall too many contemporary, commercialized films. To read the book is better.

The Man. The Myth. The Polo Sweater. Cult-declared Apple founder Steve Jobs was barely laid to rest before Hollywood initiated the transfer of his life to the silver screen. Sacrilege or not, he won't be turning too askew in his grave. Half a rotation possibly, but it could have been far worse. The depiction of the digital pioneer is, for the most part, serviceable and interesting. Jobs is played by Ashton "Dude, Where's My Car?" Kutcher, which beforehand felt like a somewhat laughable choice. Something has transpired since his stoner days though. He has grown, even inhabits the role quite well, despite a strange, remarkably forced adoption of Jobs' peculiar walking style. Kutcher is moreover a striking look-a-like. The worm in the apple is not the acting, but the shallowness in the portrayal. The film reflects many facets of its titular figure - the passion, the egomania, the dictatorial tendencies - but rather gives the impression of a list being checked off than an inspired study of a complex visionary soul. The college years are diddled away. The family subjects barely paid a thought. At the same time it wants to be moving, but achieves a mere so-so effect with its violin-playing over-sentimentality. The upside, which makes it worthwhile, is the entertainment value in the journey. From circuit board-tinkering in the parents' garage to board meetings in fancy offices. Personally, I've never owned an Apple product. Neither iPhone or iMac. But it doesn't really matter here. Steve Jobs, the man and creative trailblazer, doesn't evoke any less fascination. Just a shame I can't put any dots over the i's in "innovation icon". https://www.facebook.com/pages/Mikes-Movie-Reviews/281824101875153?ref=hl