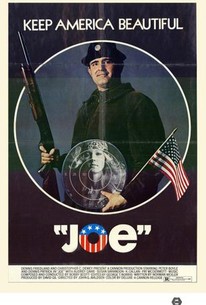 Peter Boyle delivers a strong and raw performance as Joe Curran, a racist factory worker who hates "hippies and blacks." The film deals with New York City advertising executive Bill Compton (Dennis Patrick), who kills Frank (Patrick McDermott), the junkie lover of his daughter Melissa (Susan Sarandon, in her film debut), when she ends up in a mental hospital after suffering an overdose of speed. Stunned by his rage, Bill goes into a bar and comes upon Joe, who discovers the murder and holds Bill in great esteem for his killing of the long-haired drug pusher, congratulating Bill on a job well done. The two begin a class-spanning friendship. When Melissa escapes from the hospital, after finding out that her father killed her boyfriend, Bill and Joe comb Greenwich Village to find her. When they come upon a hippie pot party, the two reactionaries snap, pull out their guns, and go on a killing spree.

Rudy Chumey
as Man in Bar

Rudy Churney
as Man in Bar

Perry Gerwitz
as Hippie on Street

Frank Vitale
as Hippie in Group

Patrick O'Neal
as Bartender at Ginger Man
View All

A raw, tough movie of enormous power, with a riveting performance from Peter Boyle as the avenging devil.

Joe clearly illustrates in its own dramatic way how this seemingly disparate forms of political identity can form under one umbrella.

a fascinating and frustrating cinematic experience ... a mishmash of incongruities, confusion, and cynicism

well acted melodrama, directed by Joe Avildsen before he made the Rocky movies, starring Peter Boyle as a racist and Susan Sarandon in her very first film.

Starting with a murder and ending with a massacre, this bleak portrait of America shows a dream turned sour and a country at odds with itself.

Cliched melodrama was a cultural landmark; Boyle is superb

What makes Joe an important movie and not just another cheap imitative exploitation movie (which it sometimes is) is the actor who plays the title role.

I admire the film's gusto to look at the hippie era, but its shock factor is more of a bail out rather than letting the story reach a meaningful conclusion.

Granted, the character that Peter Boyle is given in "Joe" is an interesting one, but the film simply doesn't do enough with him. We just watch as he exists and spouts racist and homophobic lines with none of it ever leading anywhere. Norman Wexler's script is decidedly good, but would've made for a better movie under someone else's direction.

Two guys who hate everyone who's different from them finally take some action, violent action, and in the end begin to question their beliefs. This is a brilliant movie, and I highly recommend it. Plus, watch for Susan Sarandon in her first movie!