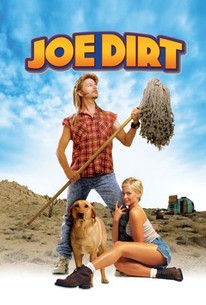 Critics Consensus: If you fall within the target audience of Joe Dirt, you may find it funny. Otherwise, the jokes will seem like a tired retread.

Critics Consensus: If you fall within the target audience of Joe Dirt, you may find it funny. Otherwise, the jokes will seem like a tired retread.

Critic Consensus: If you fall within the target audience of Joe Dirt, you may find it funny. Otherwise, the jokes will seem like a tired retread.

As the title character of Joe Dirt, David Spade plays a "white trash" janitor at an L.A. radio station, whose mullet hairdo is just one of many personal oddities that make him the object of much ridicule. And the sanitation gig is just the most recent of Joe's many incarnations during a tumultuous life, which got off on the wrong foot when Joe was abandoned at the Grand Canyon by his parents as a young child. After stumbling into the on-air studio, Joe steadily recounts the sad and comical story of how he cared for himself and journeyed around the country trying to relocate his family, all while being prodded, teased, and eventually embraced by a sarcastic deejay (Dennis Miller) and a rapt listening audience. His travels involve stints selling fireworks, wrangling alligators, riding aloft in a car dealership display balloon, and being held captive by a Silence of the Lambs-style serial killer. Despite numerous setbacks and bruising physical injuries, Joe emerges from each episode with his spirit intact as he searches optimistically for his roots, and eventually for the chance to return to the one place he was accepted -- a rural farm where the girl of his dreams (Brittany Daniel) awaits. The directorial debut of Dennie Gordon, Joe Dirt was produced by Adam Sandler's production company, Happy Madison, and features musician Kid Rock, also debuting, in the supporting role of Joe's rival. ~ Derek Armstrong, Rovi

Bob Zany
as Bullying Man No. 1

Bean Miller
as Bullying Man No. 2

Angela Paton
as Woman With Roadrunner

Avery Rosin
as Kid at Carnival

Eddie Money
as Himself

Kristina Simonds
as Reporter on the Bridge

Karl Makinen
as Cop at Bridge

James Tupper
as Cop at Bridge

Jana Sandler
as Woman on Bridge
View All

Contrived yet unpretentious, predictable yet surprising, this underdog comedy and its title character have considerable charm.

Sally forth, gentle viewer, and enjoy yourself. En route, you will experience a steady supply of doo-doo jokes, dispensed in seven-minute intervals by the Script-O-Tron 3000TM.

A comic named David Spade stars in a movie called Joe Dirt, and that's about as funny as things get here.

In one scene, raw sewage is dumped on Joe. See Joe Dirt and you'll know how that feels.

Were nature to take the course they both seem to want, the movie could end in 15 minutes. And it would still be too long.

To see it is to sit through scene after scene like the one in which a hulking oil rigger spattered with crude takes a leak on some smoldering ashes for no reason at all.

In place of anything resembling a plot, the movie wheels-out a tired collection of set-piece gross-outs for Joe to endure.

Nothing written here will stop this film from being a huge hit, but don't say you weren't warned.

With its quirky characters, silly sight gags, and the tasteless humor that has become a staple among teen comedies of late, this film will not fail to amuse its market.

The juvenile humor, however, is not so much a miscalculation as simple overkill.

A decent comedy with a few laughs, Joe Dirt lacks an effective story, but manages to make you smile a few times. In terms of this being a good comedy, it isn't, but it's not the worst either. The film has some comical moments here and there, and though never anything great, this isn't a film to take seriously. Sometimes it's good to enjoy a mindless comedy; Joe Dirt is such a film. A mindless entertaining comedy, meant to watch on a rainy night, this film may have plenty of imperfections, and it is stupid quite a few times, but it's harmless fun. Don't expect a memorable comedy with this one, expect a dimwitted film, and you won't be disappointed. This is, like I said, a mindless comedy. Funny, but stupid, this is nonetheless entertaining for what it is. The film has charm. The film could have been better, but this isn't an awful film. I enjoyed the film for what it was, and thought it was mindless fun. Don't expect a great film with Joe Dirt, expect something amusing, and you won't be disappointed. This is the type of film that you watch with friend to have a good time. The film has its flaws, but it's not as bad as you'd might think. This simply put, a fun little flick, and is much better than any recent Adam Sandler flick. There's enough here to enjoy, just keep your expectations average, and you may enjoy this film. Joe Dirt could have been a better film, but it manages to entertaining and amusing despite its many flaws. David Spade does manage to keep it amusing throughout and the gags are plentiful, even though some are pretty dull at times. Worth watching at least once.

This was too dumb for words. David Spade was perfect for this, seeing as its not much to work with. The plot is interesting in an idiotic way. The movie was overall bad, with a few funny moments.

Funny in a SNL, Spade way, but not a "masterpiece."

It was very laughable the first time around, but after that the jokes start becoming failures, and the movie plummets!