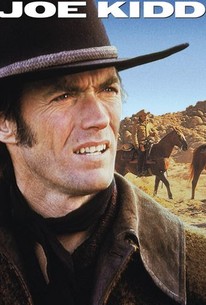 Anglo farmers have been stealing Mexican-American villagers' lands, under the pretext of having deeds which pre-empt their ancient Spanish land-grants. The poor people have had enough, and organize under the leadership of Luis Chama (John Saxon). When they nearly kidnap the local judge who had acquiesced in all this, Joe Kidd (Clint Eastwood) intervenes. Anglo landowners try to hire him to join the posse tracking down the rebels, but Joe at first refuses. Later, after his own farm suffers from the rebels' actions, he agrees. After a while, though, he sees the light and does the right thing.

All I can tell you about Clint Eastwood in Joe Kidd is that he plays a ruthless gunman of few words. This isn't exactly a surprise... The funny thing about Joe Kidd, though, is that we can't keep straight whose side he's on, or why.

Scripted by Elmore Leonard, this breezy open-air Western finds a formidable punch against masculinity by questioning the need for power while being supremely entertaining and never straying from Eastwood's clinched-jaw aesthetic.

It's lesser Eastwood (and Leonard and Sturges), but it's impossible to squash the spirit of the work, which carries the film far enough to satisfy basic needs from the genre, making it a lark, but a convincing one.

It's still a prime example of a good, sturdy bread-and-butter Western.

I remember a much faster, spectacular film. Revisiting it I was very underwhelmed. An okay Western for the era, rather entertaining too in the great scenery of the Alabama Hills. But that's about it.

Ordinary western has good actors and nice scenery but nothing you have seen many times before. Still if you like Clint and westerns this will work fine for you.

No, it's not one of the best westerns ever made, but it's really fun. Clint Eastwood gives a great performance and really plays a different western hero than usual. It's also sort've odd to see Robert Duvall as such a scumbag. It's got a really great style that makes up for the uneven plot.

Bizarrely sloppy by-the-numbers Clint Eastwood western, particularly considering the talent involved. There seems to be little logic involved in any of it; only Clints charisma and the loosely associated bouts of screen violence demand attention; the "plot" is inconsequential.