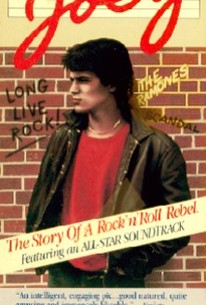 Joseph Ellison wrote and directed this engaging film about a teenager in love with rock n' roll music of the '50s. Joey (Neill Barry), a 17-year-old guitar player, likes to play his instrument in the style of his dad, Joe Sr. (James Quinn), who used to be the lead singer for a group called the Delsonics. Joey gets a group of his high school friends together and forms their own rock n' roll band. The band manages to win an important audition to play as the back-up band for a '50s revival concert at Radio City Music Hall called the Royal New York Doo-Wopp Show, where some of the original rock groups from the 1950s and 1960s are scheduled to appear. Cameo appearances by The Limelights, the Silhouettes, the Adlibs, the Elegants, Scream-in' Jay Hawkins, and the surviving members of the Teenagers grace the film.

Dan Grimaldi
as Ted
View All

There are no critic reviews yet for Joey. Keep checking Rotten Tomatoes for updates!

There are no featured reviews for Joey at this time.