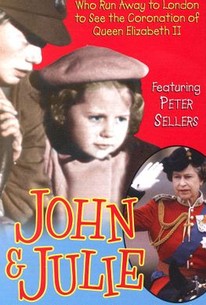 Scads of color stock footage from the 1953 coronation of Queen Elizabeth was strategically deployed in John and Julie. The story involves two little provincial children (Colin Gibson, Lesley Dudley) whose parents have no plans to attend the Coronation. Left to their own devices, John and Julie run off to London, where with the help of several eccentric types they get to see the Queen's installation. On the basis of its content, it isn't surprising that John and Julie isn't revived much these days. But some enterprising distributor might take note that the film features an early supporting appearance by Peter Sellers, once again hiding his youthfulness beneath a ton of makeup.

Critic Reviews for John and Julie

A predictable little comedy-adventure, good fun for most youngsters and bolstered by newsreel shots of the actual event.

There are no featured reviews for John and Julie at this time.