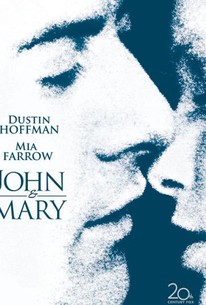 John and Mary attracted a great deal of press coverage in 1969 for being the one of the first American films in which the male and female leads (Dustin Hoffman and Mia Farrow) start out the film by spending the night together, rather than holding off until the end. The morning after, the boy and girl wander about New York, wondering if they'll truly commit themselves to one another. Both characters are haunted by unsuccessful earlier affairs, and both have enough hang-ups to fill volumes of psychological textbooks. Come nightfall, John and Mary end up back in bed...and learn each other's names for the first time. John and Mary was considered "beautiful," "progressive" and "significant" in the permissive 1960s; nowadays it's about as controversial as The CBS Morning News.

Marilyn Chris
as His Wife

Critic Reviews for John and Mary

Director Yates knows how to shape even the sketchiest scenario, and if John and Mary is no deeper than an eggshell, it is every bit as functionally designed.

The entire charade is smoothly contrived.

Hoffman and Farrow awake to each other in a New York bed and interminably worry, via chat, fantasy, flashback and some trendy cultural reference, whether they should do it again.

There is nothing wrong with the idea of John and Mary, just with its execution.

John and Mary is supposed to be a contemporary movie, I guess, and yet it's curiously out of touch.

Perhaps this is smashing stuff for a Second City satire, but Peter Yates (the director) has ignored its satirical promise.

Maybe if Dustin Hoffman and Mia Farrow generated more excitement, all this would seem more appetizing than it does.

Under Peter Yates' tasteful direction, it turns out to be a mildly chic, mildly engaging little thing.

Although John Mortimer's script takes a slightly lazy path, mixing up trendy fantasy and trendy fact as though it's no longer worth the trouble of distinguishing them, his dialogue seems to come easily.

If the main participants in this drab affair come across so uninspired, it will be hard to find an audience who will care.

Audience Reviews for John and Mary

Still under the spell of a pixiesque Mia Farrow (Sinatra, you were a moron for letting her go...!) its damn near impossible for me to give anything resembling a subjective opinion of John and Mary, but I liked it. I can see why its not the movie brought up with you think of Dustin Hoffman or even Farrow's best work but director Peter Yates wonderfully (and somewhat confusingly) intercuts might haves and flashbacks with the present story. The voiceover thoughts were kind of dumb though. Hoffman's great in a quirky way and Farrow was an absolute doll. The story's nice and simple even if there are a few dopey and dated parts to it. John and Mary is a nice little jem that's definitely worth an hour and a half.

I will say that Mia Farrow in this is amazing, easily one of her best performances and one of the most adorable characters. It's as if she channels the spirit of Audrey Hepburn with her. I really like the overall concept as well, it's a very interesting way about telling a love story. What really kept me from loving the movie was Dustin Hoffman's John. Not so much the acting but the character himself, he's just such a scumbag and poor excuse for a "good guy". Maybe that's what was trying to be accomplished, but it just seemed like he was the voice of the story. I'd still say this a great movie, it just doesn't have you rooting for the two to end up together.

Mia Farrow has such an unconventional sex appeal. Film is very clever in revealing flashbacks and what-ifs, however I'm not sure what to take away from it's discussion of sexual politics. The end is a little too reductive (even for a movie) - John and Mary decide they are right for each other and Mary reverts to a "typical" woman role in the kitchen.

[font=Century Gothic]Directed by Peter Yates, "John and Mary" starts on a wonderfully simple note. A man(Dustin Hoffman) and a woman(Mia Farrow) wake up in bed together on a Saturday morning. That first impression is only the beginning of an incisive exploration of the relationship between the two genders. The irony of this particular situation is that the two people involved had sex but that is all they know of each other, having just met. So, clues are just as important as anything they might say to form their opinions of each other.(Confirmed by their inner thoughts which are overheard by the viewer.) For example, what does the apartment say about the person living there?[/font] [font=Century Gothic][/font] [font=Century Gothic]Since the man and the woman meet while discussing "Weekend," then it should come as no surprise that the movie has a very unorthodox structure despite its static setting of the apartment. The movie flashes back to a definite past while imagining what the future may bring. Of special concern is how long the woman will stay, compared to how much the man wants her to stay. What is always true is that men will always try to impress women by how much they think they know about music.[/font]