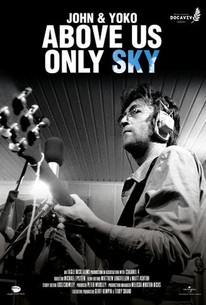 John & Yoko: Above Us Only Sky Photos

This special traces the untold story of the making of John Lennon's 1971 album "Imagine." Utilizing never-before-seen footage of Lennon and Ono from their private archive, the special delves into the depth of the creative collaboration between the couple and explores how the art, politics and music of the pair are intrinsically entwined. Features interviews with the people who witnessed the period first hand including Yoko Ono, Julian Lennon, David Bailey (photographer), John Dunbar (Gallerist who introduced the couple), Dan Richter (Yoko's neighbor and John's former personal assistant) and Eddie Veale (studio designer), some of who have never spoken publicly on camera before.

Critic Reviews for John & Yoko: Above Us Only Sky

Lennon [is] a figure who continues to fascinate...

If you're a fan of the man, it's a bittersweet blast to see him so funny, full of ideas and unbelievably young.

Seeing images of John Lennon, whether they are interviews or document something about his artistic life... is always rather captivating. [Full review in Spanish]

There are no featured reviews for John & Yoko: Above Us Only Sky at this time.

John & Yoko: Above Us Only Sky Quotes