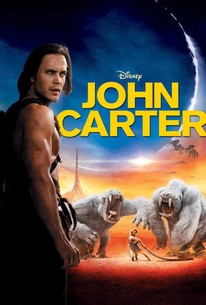 Critics Consensus: While John Carter looks terrific and delivers its share of pulpy thrills, it also suffers from uneven pacing and occasionally incomprehensible plotting and characterization.

Critics Consensus: While John Carter looks terrific and delivers its share of pulpy thrills, it also suffers from uneven pacing and occasionally incomprehensible plotting and characterization.

Critic Consensus: While John Carter looks terrific and delivers its share of pulpy thrills, it also suffers from uneven pacing and occasionally incomprehensible plotting and characterization.

From filmmaker Andrew Stanton comes John Carter-a sweeping action-adventure set on the mysterious and exotic planet of Barsoom (Mars). John Carter is based on a classic novel by Edgar Rice Burroughs, whose highly imaginative adventures served as inspiration for many filmmakers, both past and present. The film tells the story of war-weary, former military captain John Carter (Taylor Kitsch), who is inexplicably transported to Mars where he becomes reluctantly embroiled in a conflict of epic proportions amongst the inhabitants of the planet, including Tars Tarkas (Willem Dafoe) and the captivating Princess Dejah Thoris (Lynn Collins). In a world on the brink of collapse, Carter rediscovers his humanity when he realizes that the survival of Barsoom and its people rests in his hands. -- (C) Walt Disney

For the most part, the first "live action" feature by Andrew Stanton, is graphically splendiferous and enjoyably nonsensical.

Isn't the disaster some industry observers predicted, but it's not the high-gloss masterpiece some of us hoped for either.

The finished entity feels like a rip-off of a film that ripped-off several rip-offs of Carter's own ancient source material.

A century in the making, Disney's John Carter is a superlative cinematic fantasy that's without question the single most entertaining thing I've had the pleasure to see in 2012 so far.

As one of Pixar's star players, Stanton is an experienced cinematic storyteller, which is why it's disappointing that his first live-action project is so unwieldy at times.

John Carter is a good summer movie in March but, with the exception of that one fleeting segment, it's not a great movie at any time of year.

Feels heavily recycled in both its storytelling techniques and its visual effects.

The battles mostly fail to satisfy, and the film's opening scene is either a misguided mess or simply unnecessary.

It has the all the things you want out of the big summertime release with adventure, a cool hero, an interesting love interest, and big-time effects.

All together, John Carter is fun to watch and pretty to look at - just don't expect too much besides that.

Its a rainy Saturday afternoon movie for tweens. That said, Edgar Rice Burroughs isn't too badly served by this leave-your-thinking-cap-off glorioski extravaganza, with miles and miles of CGI animation used to get ... meh. Yer gonna need more popcorn. Its sorta okay. Is it still raining outside?

A US cavalry officer is accidentally transported to Mars where he encounters a warring civilisation who require his help to end the conquest of their world by a brutal warlord. When talking about cynical marketing campaigns, it's usual to point to terrible films that become big hits through licensing, advertising and sponsorship deals, but the other side of the coin is John Carter. To say that this film bombed at the box office would be an understatement of the highest order. Those responsible for the marketing of this film fumbled the ball on such a colossal scale that it couldn't hope to recoup the reported budget of $250,000,000 despite the fact that it really isn't all that bad. It's fair to say that you can see where the money was spent; it's a very attractive film packed with nice production design, spectacular set pieces and a quality cast. The problem with John Carter is that it doesn't really capture the imagination in the way a large scale sci-fi adventure should. The culture created in the form of Barsoom is rather charmless and there's little in the way of chemistry between what should be the big romantic leads at its centre. There are also too many supporting characters who get too little screen time on their own making it hard to care about any of the protagonists. But by far the biggest blunder is in how seriously it takes itself; a little campiness and a self-deprecating sense of humour would have gone a long way to making the film a lot more likeable. The result is a po-faced cross between Flash Gordon and Xena: Warrior Princess with a big budget but having said all that, the pacey if somewhat episodic plot and large scale battle sequences maintain the interest for the duration. As a whole it's rather too clinical and soulless but John Carter didn't deserve to sink without a trace and I'd much rather sit through it again than The Phantom Menace or Attack Of The Clones.

I like science fiction, and enjoyed the movie. Perhaps not having read "A Princess of Mars" is a good thing, as I didn't have the book to compare to.

John Carter must've been pretty cool at the time the books were released, but so many things since, including Star Wars and Dune - have been ripped off or inspired by John Carter -- so revisiting the John Carter tale in these modern movie times, seems dull and tired. The beginning was weighted down by the backstory wild-west setting on Earth - when viewers simply wanted to get to Barsoom and begin the excitement. The arena scenes were soo much like Attack of the Clones on the Geonosis planet. I tried several times, but just couldn't get into this movie, even when re-watching in 3D. Most of the creatures were icky. Poor Disney lost money on this thing - maybe they can re-use some of the sets and costumes in the next Star Wars movies.