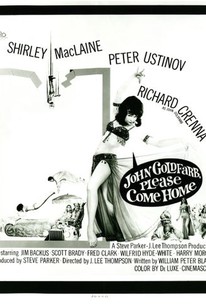 Politics and sports clash in this occasionally funny spoof centered around a downed U2 pilot and an extravagant oil sheik. John Goldfarb (Richard Crenna), a former football player, now pilot, sent on a reconnaissance mission over the Soviet Union, is lost and crash-lands in the Middle Eastern kingdom of Fawzia. King Fawz (Peter Ustinov) is constructing a football team to defeat Notre Dame and demands that Goldfarb coach his team or be handed over as a spy. In the interests of international relations, the U.S. State Department not only complies with King Fawz's request to bring the Notre Dame team to his country but in true diplomatic form insists that they throw the game. The romantic interest appears in the form of Jenny Ericson (Shirley MacLaine), an American reporter on an undercover assignment in the king's harem. A pleasant view in scanty harem garb, she lends mild amusement to the story with attempts to avoid the king's amourous advances. Although the humor falls short of its potential, the film was fortuitously saved from obscurity due to publicity generated by an unsuccessful lawsuit brought agianst the studio by the University of Notre Dame, which objected to a scene involving Notre Dame players fraternizing with harem girls. The screenplay for John Goldfarb, Please Come Home was written by William Peter Blatty who was later known for his award winning novel and screenplay The Exorcist.

Charles Lane
as Editor of `Strife'

Funny? Now and then. If you happen to catch the trailer you will have seen all the best bits.

There are no featured audience reviews yet. Click the link below to see what others say about John Goldfarb, Please Come Home!