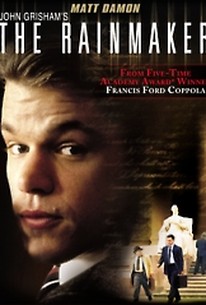 Francis Ford Coppola directs and scripts an exciting, star-packed adaptation of John Grisham's novel about an idealistic young attorney who takes on the case of a lifetime. Matt Damon (Good Will Hunting) plays Rudy Baylor, a rookie lawyer in over his head on a high-profile case. Opposing him: an army of seasoned legal sharks (led by Jon Voight). On Rudy's side: Deck Shifflet (Danny DeVito), a feisty "paralawyer" who specializes in flunking the bar exam. Rudy's chances are slim to none- until he uncovers a trail of corruption that might lead to the one thing that could win his case: the truth.

Bill Lunn
as Himself

Melissa Hurst
as Waitress at Bar

There are no critic reviews yet for John Grisham's The Rainmaker. Keep checking Rotten Tomatoes for updates!

There are no featured audience reviews yet. Click the link below to see what others say about John Grisham's The Rainmaker!