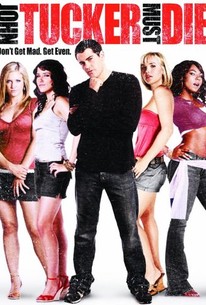 Critics Consensus: This derivitive teen comedy tries to go for cute when it could use more bite.

Critics Consensus: This derivitive teen comedy tries to go for cute when it could use more bite.

Critic Consensus: This derivitive teen comedy tries to go for cute when it could use more bite.

Three teenagers two-timed by a local lothario decide to turn the tables on him in this romantic comedy. John Tucker (Jesse Metcalfe) is the big man on campus at his high school -- he's the captain and star player of the basketball team, he's got money, he's good-looking and charming, and he can have any girl he wants. However, the latter attribute is about to get him in serious trouble when three different girls at his school -- Heather (Ashanti), Beth (Sophia Bush) and Carrie (Arielle Kebbel) -- discover they've all been dating John at the same time. Determined to bring down the campus ladykiller, the girls devise a plan -- they pick a cute but socially clumsy girl who is new at school, Kate (Brittany Snow), and give her a crash course in stealing John's heart. Once Kate has John wrapped around her little finger, she's supposed to drop him like a bad habit and give him a taste of what heartbreak is really like. However, it seems that the early stages of the plan work a little too well, and John and Kate end up falling for each other for real. John Tucker Must Die also stars Jenny McCarthy, Penn Badgley, and Dan Payne.

Steve Bacic
as Skip No. 1

Jon Cuthbert
as Skip No. 3

Aaron Dudley
as Skip No. 4

Marc Menard
as Skip No. 5

Brendan Penny
as Teammate No. 1

Taurean Mills
as Teammate No. 2

Barbara Kottmeier
as Beautiful Girl No. 1

Nicki Clyne
as Beautiful Girl No. 2

Katya Virshilas
as Beautiful Girl No. 3

Connor Widdows
as Freshman At Beach

Jessica Harmon
as Girl at Party

Chelsea Florko
as Freshman Girl No. 1

Maggie Ma
as Freshman Girl No. 2

Heather McEwen
as Freshman Girl No. 3

Amanda Crew
as Hallway Girl No. 1

Emily Tennant
as Hallway Girl No. 2

Alan Shearman
as Teacher in Thong No. 1

Archie Hahn III
as Teacher in Thong No. 2

Victor Isaac
as Guy At Party #1

Branden Williams
as Guy At Party #2

Greg Cipes
as Guy At Party #4
View All

A load of formulaic nonsense that should still turn a few young heads thanks to its fantasy plot and Jesse Metcalfe's chest.

Not the worst of its kind, but few over the age of 14 will find it worth forking out for.

John Tucker will surely die and be quickly forgotten.

John Tucker Must Die will undoubtedly fade into obscurity like so many silly and sentimental teen comedies before it. It's no wonder that the genre has turned to sex with apple pies and the like in an effort to distinguish itself.

The jokes are obvious and unfunny, the storyline goes nowhere that's interesting or unexpected, and the only chemistry happens in a science lab.

John Tucker Must Die is trying to be Mean Girls with a more pointed purpose, but it's less fun than it sounds.

The only one who's getting screwed over in this film is the audience.

Designed as an ultimate revenge fantasy "John Tucker Must Die" is a moderately funny teen comedy with a few flashes of bawdy humor.

Rarely has a title promised so much, and delivered so little. John Tucker Must Die is toothless, gormless, witless, and, worst of all, deathless.

A high-school revenge comedy that aims at a teen audience yet manages to be witty without being snarky or sophomoric.

Betty Thomas's sloppy storytelling and comic incompetence can be forgiven but to portray young women as flighty airheads obsessed with boys over all else is downright offensive.

Similar plot to The Other Women, but in high school. Preferable. Silly, but fun and not a long running time, so doesn't outwear it's welcome. Light bit of froth with a like able teen cast.

Teen movie about a group of girls who gang up to teach their boyfriend a lesson for dating them all at the same time. Good cast. If you like Clueless and Mean Girls you will like this movie.

Not much to see here.

Hilarious! A must-see for any girl who's boyfriend was going out with someone, or three other someones' for that matter. The cast of Brittany Snow, Ashanti, Sophia Bush, Arielle Kebbel, Jenny McCarthy, Jesse Metcalfe and Penn Badgley was just great. This is a great movie to watch with your girlfriends on a Friday or on a regular week day (: