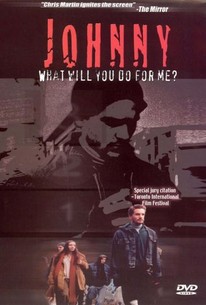 Heralded as the first North American entry in the growing Dogma '95 canon, Canadian director Carl Bessai's riveting urban drama is raw, bare-boned, and bleak. Johnny (Chris Martin) is a street kid with an insatiable appetite to manipulate, charm, and coerce. After swiping a camera from his pal Albert, he soon becomes obsessed with making movies. He demands that his loyal gang of followers risk themselves and others for the sake of the dramatic scenes and for his own naked lust for power. This film was screened at the 1999 Toronto Film Festival and at the Thessaloniki Film Festival. ~ Jonathan Crow, Rovi

Vanessa Shaver
as Dell
View All

There are no critic reviews yet for Johnny. Keep checking Rotten Tomatoes for updates!

There are no featured audience reviews yet. Click the link below to see what others say about Johnny!