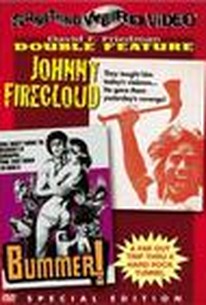 Puerto Rican actor Victor Mohica plays the title character, a Native American who has returned to his small California desert home town after service in Vietnam to face a new enemy -- a gang of ruthless racist thugs led by town boss Colby (Ralph Meeker). Pushed to his breaking point by a neverending string of brawls and harassment by town sheriff Jesse (well-played by David Canary, later on All My Children), who is kept under Colby's thumb by a hidden secret. Johnny finally snaps when Colby's goons lynch his alcoholic grandfather (Frank De Kova of F Troop) for kicks. Johnny escapes from prison and vanishes into the desert. There, he stalks and brutally murders each of the gang members responsible for his grandfather's death. A panicked Colby sends Jesse after Johnny, and soon, the two are facing each other down. Jesse must choose between obeying his cruel employer or freeing a man who has suffered the same sort of injustice as he.

There are no critic reviews yet for Johnny Firecloud. Keep checking Rotten Tomatoes for updates!

There are no featured audience reviews yet. Click the link below to see what others say about Johnny Firecloud!