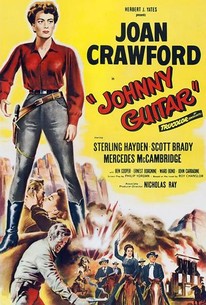 Strong-willed saloon-casino owner Vienna squares off against her nemesis, the shrieking Emma Small, who wrongly blames Vienna for her brother's death.

Will Wright
as Ned

Ray's film is a western, but it is also an amplified melodrama, with a rich seam of deviant psychology just waiting to be disinterred from its dusty surface. Its time has come.

A cheap Western from Republic Pictures, yes. And also one of the boldest and most stylized films of its time, quirky, political, twisted.

A movie for anyone who's ever been judged on their appearance, their outlook or the way they choose to live.

It's not just Joan's campiness -- her line readings take on an almost incantatory quality -- but the way the whole thing feels like a stealth therapy session for smart actors trapped in horse-opera stereotypes.

Episode 36: Love in the Time of Monsters / Barbarella / Welcome to the Dollhouse / Johnny Guitar

Johnny Guitar is not really a Western, nor is it an 'intellectual Western'. It is a Western that is dream-like, magical, unreal to a degree, delirious.

While I won't say that I loved the film (it retains enough of its genre's tropes to not quite work for me), I was surprised by how glorious the sets and landscapes looked.

Double-crosses, beautiful losers, gunplay and waterfalls and fire and whiskey, it's all here.

This baroque bonanza fascinates on so many levels that it demands to be repeatedly viewed and reviewed.

The first 45 minutes are perfect, with impeccable performances (Crawford at her best) and an exceptional dialogue, but then the film starts to lose steam and drag in a few moments, while Vienna's peaceful (passive, that would be) motivations become a bit exasperating.

It's quite a weird western with Joan Crawford filling the John Wayne shoes, glossy romantic scenes which could be thrown into a Douglas Sirk film and all painted with dramatic red strokes - from the sunsets, to a dramatic fire to Crawford's iconic lips. And it all ends in a rootin' tootin' gun shooting between its two female leads - a sort of Western version of a women's catfight. Peppered with great dialogue and a performance by Mercedes McCambridge which leaves no doubt why she was chosen to play the demon in "The Exorcist", there's little not to love.

I hate westerns, so I rated it lower because of that, but it is a different kind of western than normal. The story is sort of boring, but the characters aren't is another way of putting it. Anyway, it's interesting.

Joan Crawford is Vienna, a frontier woman you don't want to mess with, but her arch nemesis, the maniacally evil Emma Small (Mercedes McCambridge) is one terrifying broad. The movie may be titled "Johnny Guitar", but it's all about the women duking it out, in a sort of pseudo-feminist western (the men are all but dominated by the women). The film opens strongly, with a confrontation in Vienna's casino/bar. It seems the stage coach was robbed and Emma's brother was killed (they bring his body right into the casino and lay it down on the craps table). Emma blames Vienna's club and the men who frequent it, especially "the Dancin' Kid" (Scott Brady). In reality, Emma is in love with the Dancin' Kid and is jealous of his relationship with Vienna (who it's suggested, is sort of a fallen woman). She has another reason to hate Vienna; as the new railroad is being built, more and more outsiders will come to town, spreading their indecency and immorality. She thinks Vienna is the vanguard in an onslaught that will bring about her cherished town's destruction. She forms a posse and seeks to lynch Vienna, the Dancin' Kid and his cohorts. The Dancin' Kid claims he and his pardners are mining silver in a hidden mine, but they're being run out of town anyway. The Kid decides if they're going to be accused of being criminals, they may as well be criminals and they go and rob the bank. Vienna happens to be in the bank at the same time, closing her account. One thing leads to another, and it's Vienna who's accused of aiding the outlaws. In the midst of all this is Johnny Guitar, once Vienna's lover and now just a wandering minstrel. Vienna sends for Johnny to come and perform in her saloon, but really she wants to use him for protection, for you see Johnny is a former gunslinger, and one of the fastest and best gunmen in the west. The plot details don't mean a whole lot, as this is all just an excuse to see Crawford and McCambridge go at it, tooth and nail. All in all, it's good, 1950s, campy fun.