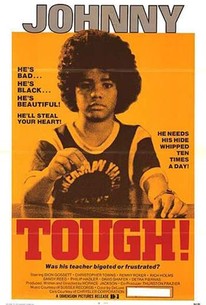 Johnny Tough is a "blaxploitation" film tempered by a social consciousness. Dion Gossett plays a young urban African-American. Gossett continually rebels against the white establishment, as represented by his teacher. The boy finds he can expect no back-up of his attitude at home, where his parents wallow in self-indulgence, so he feels that a show of force is his only option. Renny Roker and Sandy Reed also appear in this film. Not quite as violent as most films in its genre, Johnny Tough was consigned to the Late Late Show circuit as soon as it finished its initial theatrical run.

There are no critic reviews yet for Johnny Tough!. Keep checking Rotten Tomatoes for updates!

There are no featured reviews for Johnny Tough! at this time.