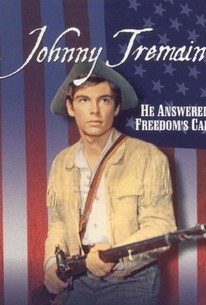 This Walt Disney filmization of Esther Forbes' Revolutionary-War novel Johnny Tremain was appropriately released on July 4, 1957. New Disney discovery Hal Stalmaster plays the title character, an apprentice silversmith in 1773 Boston. An on-the-job injury prevents Johnny from finding a job, but he is welcomed with open arms at the headquarters of the Revolution. After standing trial on a trumped-up robbery charge brought about by British sympathizer Jonathan Lyte (Sebastian Cabot), Johnny is set free, whereupon he joins the Sons of Liberty during their execution of the Boston Tea Party. Later on, General Gage (Ralph Clanton), the officer in charge of the colonies, does his best to stem the activities of the Sons of the Liberty without resorting to violence but this becomes a moot point after the battle of Lexington Green. If the storyline of Johnny Tremain seems to be divided into two even halves, it is because the film was originally intended as a two-part installment of the Disneyland TV anthology. As it turned out, the film did receive TV exposure on Walt Disney Presents, divided (as planned) into two segments: "The Boston Tea Party" (first telecast November 21, 1958) and "The Shot That Was Heard Around the World" (December 5, 1958).

Will Wright
as Ephraim Lapham

The film works better as a kid adventure film than as an adult one.

An enjoyable enough history lesson disneyified but most of the acting is atrocious!

The book was better.