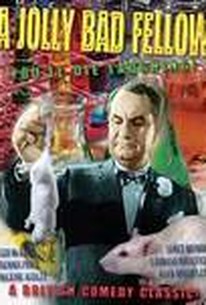 They All Died Laughing plays for satire what any other film might have played for suspense. Leo McKern plays a college professor, of the addlepated rather than absentminded variety. McKern has come to the conclusion that certain people are leeching off society, and the world would be well rid of them. He heads for his laboratory to create the means of "purging" these useless people. He comes up with a poison that prompts his victims to laugh hysterically before joining the Choir Invisible. A little more heavy-handed than the British "dark farces" of the 1950s, They All Died Laughing was originally released in England as A Jolly Bad Fellow. ~ Hal Erickson, Rovi

Mark Dignam
as The Master

Raymond Ray
as The Waiter

There are no critic reviews yet for A Jolly Bad Fellow. Keep checking Rotten Tomatoes for updates!

There are no featured reviews for A Jolly Bad Fellow at this time.