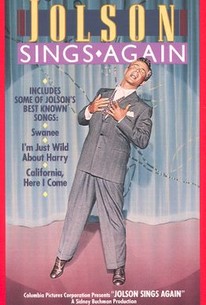 This Technicolor follow-up to Columbia's 1946 blockbuster The Jolson Story again stars Larry Parks as legendary entertainer Al Jolson--and Jolson himself, as Parks' singing voice. The story concentrates on Jolson's tireless activities entertaining the troops during WW II. After VJ day, Jolson finds that his services are no longer required. Fortunately, he stages a spectacular comeback, thanks in great part to the release of The Jolson Story! The film's Pirandellian overtones come to a head when Larry Parks as Jolson meets Larry Parks as Larry Parks. Also returning from The Jolson Story are William Demarest as the title character's manager Steve Martin, Bill Goodwyn as Broadway-producer Tom Baron, and Ludwig Donath and Tamara Shayne as Jolson's old-world parents. Barbara Hale appears as Jolson's wife (his third, though this fact is not dwelled upon), renamed Ellen Clark for the moment, while Myron McCormick plays a composite character based on several Hollywood executives (including, one supposes, Columbia mogul Harry Cohn). Song highlights include "After You've Gone", "You Made Me Love You", "Let Me Sing and I'm Happy", "Sonny Boy", "About a Quarter to Nine", "April Showers", "Back in Your Own Backyard", and, of course, "Mammy".

Larry Parks
as Al Jolson / Himself

Peter Brocco
as Captain of Waiters

Al Jolson
as Himself [singing]

Gertrude Astor
as (uncredited)
View All

About as good as a sequel can be.

This color sequel to the first biopic of Al Jolson (in 1946) is not as good as the original, but it's production vaues are good, scoring and cinematography were nominated for Oscars.

Without Jolson's voice on the soundtrack this film wouldn't have worked.

There are no featured audience reviews yet. Click the link below to see what others say about Jolson Sings Again!