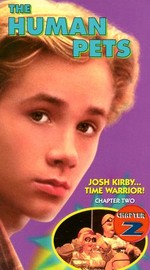 Robert I
½ January 22, 2013
The high rating is just for the conclusion of The Dino-Knights, the Human Pets part is pretty lame.

Robert I
½ November 5, 2007
The high rating is just for the conclusion of The Dino-Knights, the Human Pets part is pretty lame.

July 6, 2007
Apparently this is the greatest creative endeavor of this or any century.

Morgan S
August 20, 2006
I think this movie is quite popularly believed to be the worst in the entire six movie saga, and is most definitely my least favorite in the series. What I think that it really lacks is the love and care that went into all of the other films, which makes this movie less hard to enjoy. It just seems completely slapped together at the last minute, like they weren't even going to include it, but they ended up doing it right before the movies were released on video. Besides that, the plot is the weakest out of all the movies, and it really doesn't help that the whole first half of Human Pets is taken over by the ending to Dino-Knights. And the end of Dino-Knights on this movie is ended so ubruptly, you will miss it if you blink.

The Human Pets simply seems unfun. I don't have a very good time when I watch it. Yes the acting it just as bad or good as always depending on whether you are Jennifer Burns and Derek Webser (bad) or Barrie Ingham (good).

This movies story really makes more sense as the first movie, as we get a lot of insigts into the character of Azabeth Siege. We see how Josh and Azabeth get to know eachother, making it seem more realistic that Josh "cares a lot about her" in the first Time Warrior movie in which there is no way that the two could have ever bonded in such a way, because their first meeting in Dino Knights is entirly unfriendly.

It really is not such a great installment in the epic movie, it just lacks the badness that was so good in the other movies. This movie is simply so bad that it is almost not good anymore. Though, I do enjoy some of it, most of it seems like a waste of time.

It really is a bad movie, don't think that I am saying anything different, but it just doesn't have as much potential as the other movies in the series to be so bad that they are good. At least worth a go if you are interested to see what happens at the end of Dino Knights.
Page 1 of 1