Journey to Italy (Viaggio in Italia) (Strangers) (The Lonely Woman)1954

Journey to Italy (Viaggio in Italia) (Strangers) (The Lonely Woman) (1954) 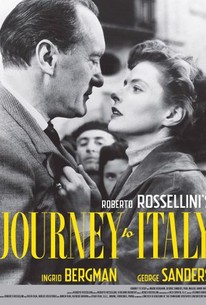 Roberto Rossellini directs this drama starring his then-wife Ingrid Bergman as Katherine Joyce, a wealthy British woman who accompanies her husband, Alex (George Sanders), on a trip across the Italian countryside to close on an inherited villa in Naples. Far from their London home, the couple becomes frustrated with each other and seem to be headed for divorce. Katherine tells Alex about a lost lover who risked his life to see her, but it only leaves Alex even more indifferent to her. Planning to spend the rest of their vacation away from each other, Alex joins up with some other British guys on Capri to drink and flirt, while Katherine tours the natural attractions and museums of Naples and Pompeii. Viaggio in Italia was unsuccessful when it originally released to theatres; years later it was discovered by French critics and called a masterpiece in Cahiers du Cinema. ~ Andrea LeVasseur, Rovi

Jackie Frost
as Betty
View All

One of the most quietly revolutionary works in the history of cinema, Roberto Rossellini's third feature starring Ingrid Bergman (his wife at the time), from 1953, turns romantic melodrama into intellectual adventure.

You might not want to bring along someone you love, because you could end up leaving the theater alone.

In the end the film magnificently justifies its classic status as an affirmative statement about relationships.

There is real greatness in this movie.

An influence on everyone from Michelangelo Antonioni to Jacques Rivette, this brave work still stands as a watershed.

Rossellini stealthily ushers us towards a sense of heady affirmation so primal that 'romance' isn't a strong enough word for it.

The old relationship between the sign and the idea is shattered: in its place there emerges a new and disconcerting one. Such is the elevated and brand-new conception of realism that we discover here.

Journey To Italy is a delicately and delightfully crafted exploration of relationships, complacency, and the evocation of our connections to our anthropological roots.

The future Nouvelle Vague filmmakers of Cahiers du Cinéma knew they were seeing a landmark... and Jacques Rivette in particular rose eloquently to its defense; Martin Scorsese took up its cause later on as a personal favorite.

Despite all the irritating behavior exhibited by both spouses in Journey to Italy, Roberto Rossellini's film is ultimately a work of great compassion.

Journey To Italy is a searing portrait of love turning sour under the Neapolitan sun and a bold adventure in a new kind of filmmaking.

If one accepts the narrative simplicity and that the journey is both physical and spiritual, the film offers many rewards.

Ponderous direction doesn't help but the two leads are so talented that they make this pedestrian drama worth watching.

"Voyage to Italy" starts with Alex(George Sanders) and Katherine(Ingrid Bergman), a wealthy couple, traveling from England to Naples to see Burton(Leslie Daniels) about settling a family estate there. That's only the beginning of the journey, at least emotionally, as she thinks he could use the trip as a break from work but he only intends to stay as long as necessary to complete the deal. For the record, they seem like one of those mismatched couples who got married only after seeing there was nobody else left and said why not. But as radiant as the human actors are in the movie, they are not the stars of it. That comes down to the local scenery and history of Naples, where despite all the death, both ancient and recent, the locals live their lives to the fullest which Alex and Katherine have trouble adjusting to, and not just because they drive a car with a steering wheel on the wrong side of the car. And that's pretty much it for any kind of story here which is unsentimental to a fault, at least until the movie's forced ending.

An intimate and involving drama about an unhappy couple facing the collapse of their marriage while on a trip that only exposes their mutual discontent. It feels sad and real, but it is a pity that the story ends in such an easy and artificial way.

Innovative narrative structure. Italy itself is a predominant character in this subtle film. A precursor to Antonioni's alienation trilogy.