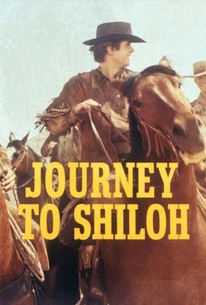 Seven volunteers from West Texas sign up with the Confederate Army in time to fight in the bloody battle of Shilo. Led by Buck Burnett (James Caan), the men call themselves the Concho County Comanches. After the battle, Buck ends up in a field hospital with his arm amputated. He discovers the only survivor of the group from Texas is Miller (Michael Sarrazin). He goes to the aid of his friend only to find him dying an ignoble death as a disgraced deserter in a barn like an animal. Paul Peterson and Harrison Ford join Don Stroud and Brenda Scott in this uneven war film plagued by too much dialogue and not enough action. David Gates provides the musical score.

Albert Popwell
as Samuel
View All

Critic Reviews for Journey to Shiloh

There are no critic reviews yet for Journey to Shiloh. Keep checking Rotten Tomatoes for updates!

Audience Reviews for Journey to Shiloh

Ponderous western starts out well but loses it's way at about the halfway point. Much of the fault lies in the direction since the cast are all able players. James Caan's wig is so obviously fake that it becomes incredibly distracting. Still interesting for the cast including a young Harrison Ford.