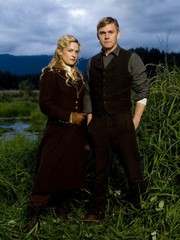 Journey to the Center of the Earth

Journey to the Center of the Earth Reviews

Wes S
June 22, 2015
A little budgeted, but the characters are fairly fun though not incredibly developed. Not a lot of prehistoric monster action, to be expected, nor is this the most exciting rendition of the story- but it's far from the worst.

Xpocalypse S
½ April 18, 2013
For a made for TV type of movie this wasn't bad, but as such it just isn't going to have the blockbuster action or effects. Somebody expecting that will be disappointed. Its main weakness is that it is a bit slow. It seemed like it wanted to be an action movie but just didn't know how, and too many scenes which should have been exciting action were rather dull. It has a decent cast. They probably could have made a better movie if they focused more on that. It was supposedly set in the 1870s and it did have some interesting sets and costumes. A bit laughable, though, when they bust out flashlights.

Super Reviewer
Doctor S
October 27, 2012
Lazy, hazy Jules Verne adaptation - this should seem like grand adventure, not a weekend outing. They had no budget so the actual trip down and especially the trip back up are absurdly short, the bulk of the movie takes form in the planning stages (excitement!) or among a clan of natives who found their way to the earth's core from the surface - seems the writer got this story confused with Conan Doyle's The Lost World. But that's the one major departure, besides the character names most of the other events stay true to the book. Certainly comes a lot closer than Disney's latest release with Brendan Fraser.

But faithful adaptation alone does not a thrilling film make. The actors don't give any more effort than the director. And why should they? Victoria Pratt is the heiress financier of the journey to find her husband (another similarity with The Lost World). She looks good as ever, although her chiseled physique, out of place amongst ladies of the Victorian era, is well hidden beneath rugged clothing, and sadly she only throws one punch. The big chuckle comes when Peter Fonda as Pratt's husband enters wearing a stack of fur pelts giving him the appearance of a mangy Wookiee. I think he got the part only because first choice David Carradine was dead, so he somnambulates in his place. Oh Peter, how low can you go - about 10 miles under the earth's surface, it turns out! (I thought of that joke the minute he showed up and couldn't wait to stick it in this review.)

I recently watched Shannen Doherty in a similar made-for-crap special in Lost Treasure of the Grand Canyon, and while this movie might be slightly technically superior, at least that one's indefatigable boneheadedness kept things partially entertaining. This Journey is about as exciting as a trip to the grocery store.

Kendall I
½ October 2, 2012
This is my first version of Journey to the Center of the Earth I've seen,and I really disliked it. It was so slow moving and uneventful that it seemed like a history documentary. On a positive side,the acting was great. Negative again,the effects were bland,but still quite interesting. I know this movie has SOME good in it so I won't COMPLETELY bash it. That and I couldn't even finish it...

Tom G
February 28, 2012
Pretty good scenery and had me more interested than I anticipated but still kind of flat.

Gerry P
½ January 15, 2012
Could only stomach 15mins. And that was to see the all girl marine troup meet their first monster. Avoid.

Kendall I
½ February 23, 2011
This is my first version of Journey to the Center of the Earth I've seen,and I really disliked it. It was so slow moving and uneventful that it seemed like a history documentary. On a positive side,the acting was great. Negative again,the effects were bland,but still quite interesting. I know this movie has SOME good in it so I won't COMPLETELY bash it. That and I couldn't even finish it...

Kendall I
½ February 23, 2011
This is my first version of Journey to the Center of the Earth I've seen,and I really disliked it. It was so slow moving and uneventful that it seemed like a history documentary. On a positive side,the acting was great. Negative again,the effects were bland,but still quite interesting. I know this movie has SOME good in it so I won't COMPLETELY bash it. That and I couldn't even finish it...

Barbara J
½ February 13, 2011
A western approach to the journey, though it dragged a bit.

Scott J
½ February 4, 2011
The more I think about this movie, the lower its scores gets. Take a classic, hire a hack to do an adaptation of it, add in wet-behind-the-ears actors and actress plus a has-been (Peter Fonda), include two special effects (TWO!), and do filming at a tourist frontier town and on a camping trip, you do all that and you got this TV movie.

Everything is not rushed through but simply simplified. Each scene is reduced down to the absolute minimum.

Peter Fonda's performance is ... well, I've never seen him give a good performance yet. Wooden and VERY likely stoned.

The ending just starts making you laugh. Which do you think would run. A group of five people who have shown they're crack shots with GUNS against at best ten people with poorly made bows, arrows, and spears? The ones with the guns, right? Right.

Oh, and don't think too long about anything in this movie. Like how could a primitive society come up with a modern-day zip line. And this is supposedly a story that took place in the 19th century. Putting a piece of beach wood on the rigging made up for it though. Totally.

What's really funny is the special "behind-the-scenes" features where the actors and actress talk about this movie was "Citizen Kane". They actually did their best acting while saying nice things about the movie, its director, Peter Fonda, and so forth.

Now if you want to make this movie into a drinking game, drink everytime you hear "Uncle" said by the nephew actor.

Linda W
September 18, 2010
I tried to watch this but it was very very boring...It was listed as the one with Brendan Frazer...The underground looked just the same as above ground...Fizzle.

James H
½ July 3, 2010
Not the best version of the story, and also not the worst version. Decent CGI effects. It?s hard to completely mess up a story as good as this one. It?s watchable and reasonably entertaining. The acting is fair, nicely photographed.

Sean C
June 23, 2010
Given that this was a TV movie it far better than expected. The effects are so-so but hey low budget waddaya expect? And the makers choose wisely not to try and have ideas bigger than they can afford. It's watchable and would appeal to undemanding children and the undemanding child in most adults too.

Julie B
½ April 4, 2010
Brendan Fraser is his usual likable self and the 3D effects are great, but there's not much of a story behind the eye-popping visuals.

Scott C
February 23, 2010
Ummm...why? Good lord, man--you're Peter Fonda. Your dad was a legend and you are taking the heavy role in the TV version of Journey to the Center of the Earth playing second fiddle to Silver Spoons' Ricky Schroder? That's like playing Captain Nemo opposite Gary Coleman on XM Radio.