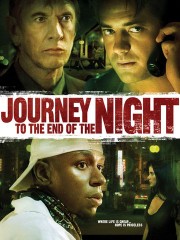 Journey to the End of the Night

Journey to the End of the Night Reviews

F B
½ July 27, 2016
A reasonably enjoyable film but a bit confusing with the amount of different characters in it who I couldn't keep track of who they were.

Dawn C
January 25, 2016
if you're looking to love Brendan Fraser in this -- you won't-- in fact i almost hated him after watching this... You actually want his dad to come out on top -- then the flip happens and you feel for Brendan's character. I have no idea what the people who hated it were watching -- it was a solid, yet dark, movie.

Don S
½ November 28, 2015
An exotic dancing night club owner and his son, Americans in Brazil, find a suitcase of cocaine and broker a deal of a lifetime. It takes a special kind of stupid to have no back-up plan, and these idiots looking for a cash-grab are just that kind of special. Their mule dies after sex with a cross-dressing prostitute, and they must rely on a dishwasher from the club to be the mule. I wanted to enjoy this - I really like Fraser - but these characters are cyphers and you can't root for or care about them.

E H
May 13, 2015
a thrilling or at least entertaining piece of a colliding crime story piece with some good names to use in interesting films like this as each stars screen talent's used to good extent in this dark Brazilian landscape.

Frances H
½ October 1, 2014
Thought I'd give it a watch because I like Brendan Fraser (or used to) and Scott Glenn, but the plot here is about such despicable people I couldn't bring myself to finish it.

Grant S
½ May 3, 2014
Brendan Fraser should avoid playing the bad guy. Maybe avoid drama altogether and still to comedies, animated movies and children's movies. His portrayal of a badass villain is so bad it's laughable - you'd think it was a parody of a villain. His performance is so bad it goes past good and back to bad again.

However, Fraser does not single-handedly ruin the movie, though his performance was capable of doing that. The plot is wafer-thin too. Tries too hard to be gritty and instead ends up a random, gratuitous-violence filled mess. Just seems to drift along haphazrdly with no point at all.

Mos Def's performance is one of the few positive aspects of the movie. Quite convincing.

Scott Glenn is pretty solid in his role too.

Other plus is that the movie is reasonably short...

Katie L
½ March 9, 2013
Almost a good story, but enough there to keep me watching. Too much gratuitous violence, and suspense, but easy enough to fast torward through. Glad I only paid a dollar to see it.

Sma A
August 26, 2012
Mos Def was cool in this movie and that's about the only good thing I can say about this movie.

April N
January 29, 2012
Brendan was truly believably evil. I was amazed. A crazy, shocking, twisted, little movie. Mos Def is the most underrated actor today. He was awesome. Scott Glenn's portrayal of an older, sad, burnt out man who just wants to get out was just that...sad. Do you really want to know what the old, blind fortune telling man has to tell you?

Tishka F
January 2, 2011
Four years after waiting on line at the Tribeca Film Festival unsuccessfully: Not a good movie ... Fraser was almost painful to watch ... did like Mos Def tho!

Jason J
October 25, 2010
Sensational! Great performances by everyone. Scott Glenn was great as I expected, but Brendan Fraser and Mos Def were surprisingly awesome. Mos Def is the master of subtlety in this film and Brendan Fraser was incredibly great especially since the last movies I saw him in were those mummy movies. Didn't know Fraser could be so dark.

I love the camera work in the film, the acting was great, and I like the story of these characters, people who are trying to escape the ugliness in their lives. It's interesting to see how these characters respond to the circumstances that are put upon them.

JJ P
September 17, 2010
An extremely dark movie. Who knew Brendan "Encino Man" Fraser could act this well? not to say his performance was mind blowing or Oscar worthy it wasn't it just surpassed his usual "ability". Watch it... if you can find it.

Dana A
May 5, 2010
Look at Brendan Fraser doing something called "acting." Who knew he actually posessed this talent. This was a very entertaining, interesting and stylish film. Short, yet well layered with great character arcs. Mos Def proves himself again to be a great actor as the film is well cast. This was a very original, with multiple twists, turns, where you have to pay attention to even the smallest character. Really didn't expect to like this as much as I did. It was attention grabbing right from the beginning. Simply a well executed film that should have been seen by more people.

Jess M
January 7, 2010
An interesting movie. A little dark, and as far as originality goes -- stringing together unrelated characters in this way is a bit overdone -- but overall, entertaining and memorable.

Mark B
½ January 5, 2010
I've always wondered if the affable and talented Brendan Fraser could pull off a deadly, cheating, low down, double crossing drug addict. Actually, that question never entered my mind until about 10 minutes into "Journey to the End of the Night." Regardless, the answer is NO.

The film has a spicy plot, with a bunch of unruly characters all angling for possession of a suitcase full of cocaine or, later, a bag full of money. Worst of the lot is Fraser's character, Paul, who is even willing to knock off dear old dad if it means he gets to keep the cash to himself.

Filmed on location in Sao Paulo, this is a dark and brooding film about the destructive power of greed. It's seedy, and laden with characters that are very easy to dislike. Scott Glenn is effective as the father, and the two Latinas in prominent supporting roles, Alice Braga and Catalina Saldino Moreno, are very good. Mos Def is enjoyable, and he develops a tangible chemistry with Braga during their short time on screen together.

The film really leans on Fraser's ability to pull off his character. We need to truly despise Paul in order for us to have any emotional investment in how things turn out. But Fraser can't pull it off. He has his moments, but his key scenes late in the movie seem to be out of his reach. The result is an interesting movie, suspenseful at times, but with nothing to really care about in the end.