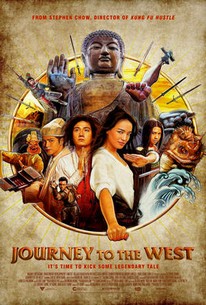 Critics Consensus: As sweet, silly, action-packed and ridiculous as director Steven Chow's best work, Journey to the West serves up dazzling action sequences while playing its disparate elements against each other with thrilling abandon.

Critics Consensus: As sweet, silly, action-packed and ridiculous as director Steven Chow's best work, Journey to the West serves up dazzling action sequences while playing its disparate elements against each other with thrilling abandon.

Critic Consensus: As sweet, silly, action-packed and ridiculous as director Steven Chow's best work, Journey to the West serves up dazzling action sequences while playing its disparate elements against each other with thrilling abandon.

Journey To The West Photos

Based on one of the Four Great Classical Novels of Chinese literature of the same name, Stephen Chow's 'Journey To The West' is a contemporary remake of the misadventures of a Buddhist monk as he makes a pilgrimage from China to India. --(C) Magnet

Xing Yu
as Fist of the North Star

Critic Reviews for Journey To The West

A kung fu comedy, a Chinese fairy story, a Buddhist action movie, a prequel to a mega-series that makes James Cameron's ambitions look puny, Chow's Journey to the West is everything that is good about China's mega-blockbuster inclinations.

Journey to the West works so well because Chow has a flair for grand comic-action set pieces, and his imagination seems to actually draw energy from these rapid-fire tonal shifts.

There's a grandness to the action sequences, playful allusions to 'Jaws,' and a great feel for the spectacular. It's just a shame its story gets lost in translation.

By turns daffy and dazzling, awkward and artful, "Journey to the West" takes an ancient tale and gives it contemporary flair.

Mutates from touching, to funny, to downright violent in mere seconds.

Filled with comedy, but also boasting extensive action and unexpected moments of horror.

We are even transported by Tsai's ecstatic play of light, space, and time-cinema at its purest.

Stephen Chow's Journey To The West: Conquering The Demons is a thoroughly entertaining action comedy that suggests, a la Woody Allen, a promising new life behind the screen for the actor-director.

Chow breaks out one elaborate set-piece after another.

It makes good use of computer animation and slapstick action comedy.

Audience Reviews for Journey To The West

A much better version of the Monkey King story than the other outing with Donnie Yen made the same year.

A Buddhist demon hunter who tries to redeem evil spirits clashes with a powerful mercenary huntress who keeps killing his potential converts; she also falls in love with him, despite his vow of chastity, and together they seek the Monkey King's help to defeat a powerful boar demon. The special effects aren't up to Hollywood standards and the Chinese comedy tropes are unfamiliar, but only the most unimaginative and parochial Westerner could fail to be charmed by this endlessly inventive and surprising fantasy/comedy/romance from Stephen (KUNG FU HUSTLE) Chow.

This has become a bit of a running joke, but this is ANOTHER Stephen Chow movie that I like better than his, supposed, masterpiece Kung Fu Hustle. I really do need to watch that film one of these days, to see whether or not the years have been kind to the film, or if something clicks for me that didn't click the first time I saw it. Regardless, the point is that this film is another slice of kung fu absurdity and silliness with a surprising "emotional" wrinkle in its story. I put emotional in quotation marks because it could be interpreted as melodramatic by some, but it also serves its purpose in Tang, main character, and his search for enlightenment and understanding of what, he calls, Greater Love. Admittedly, it feels a little out-of-place with how silly and goofy the film's action, and its comedy, truly is but ultimately it does open up Tang's view of the world and how one love isn't greater than the other. It sounds kinda cheesy, but I was actually perfectly fine with this. You don't typically expect a movie this goofy to end on such a serious note, so this is a welcome change of pace. One of the film's problems is its pacing. For example, when Tang finally finds the Monkey King, who's easily the most memorable and entertaining character of the movie, they have this very long scene before Duan finally shows up. It does lead to a very funny line when she does arrive as she catches the Monkey King and Tang in a uncompromising position. But everything leading to Duan's arrival could've been shortened up for the sake of pacing. That's the most egregious example that comes to mind. The first battle with the Fish Demon also went a little long. Really, the first hour of the movie really isn't much. It's good, but it isn't much. Yes, there are plenty of gags, but story-wise, it doesn't really amount to much. I think it's only once Tang decides to find the Monkey King that the film really starts and it's off to the races from there. The special effects aren't outstanding, but that doesn't really bother me as the budget simply isn't there as it is for the summer blockbusters we get here with some of the best special effects ever seen. I think we've been spoiled by that. It's not that other countries, with less money for that type of stuff, are bad at it...it's just that they spend so much money on it on THIS side of the world, that it makes everyone else look bad by comparison. The acting is perfectly solid, but it's not really something that you notice amidst all the insanity and the over-the-top action and comedy. Really fun film right here, so if you're a fan of Stephen Chow's style, then this is gonna be right up your alley.

Journey To The West Quotes