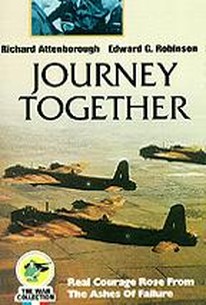 Filmed in 1945 and released in the US the following year, the Anglo-American Journey Together is a tribute to the Royal Air Force, with several members of the RAF (and the acting profession) in prominent roles. The story follows the progress of two aspiring RAF pilots, cockney David Wilton (Sgt. Richard Attenborough) and college graduate John Aynesworth (Aircraftsman Jack Watling), from basic training to bombing mission. David and John are briefly sent off to America, where they are trained for aerial combat by no-nonsense Dean MacWilliams (Edward G. Robinson). The two flyboys then separate, with David going to Canadian Navigational School while John earns his wings and is shipped back to England. It's a tougher road to hoe for the combative, fiercely independent David than it is for the calmly resilient John, by by film's end the two comrades in arms are together again, flying their first hazardous mission over Berlin. Bessie Love, an American actress then living in London, plays Edward G. Robinson's wife; other roles are filled by members of the Royal Canadian Air Force and the US Army Air Corps. ~ Hal Erickson, Rovi

Ronald Adam
as The Commanding Officer

Sid Rider
as A Fitter

Critic Reviews for Journey Together

There are no critic reviews yet for Journey Together. Keep checking Rotten Tomatoes for updates!

There are no featured reviews for Journey Together at this time.