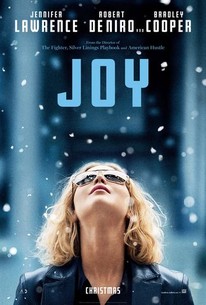 Critics Consensus: Joy is anchored by a strong performance from Jennifer Lawrence, although director David O. Russell's uncertain approach to its fascinating fact-based tale only sporadically sparks bursts of the titular emotion.

Critics Consensus: Joy is anchored by a strong performance from Jennifer Lawrence, although director David O. Russell's uncertain approach to its fascinating fact-based tale only sporadically sparks bursts of the titular emotion.

Critic Consensus: Joy is anchored by a strong performance from Jennifer Lawrence, although director David O. Russell's uncertain approach to its fascinating fact-based tale only sporadically sparks bursts of the titular emotion.

JOY is the wild story of a family across four generations centered on the girl who becomes the woman who founds a business dynasty and becomes a matriarch in her own right. Betrayal, treachery, the loss of innocence and the scars of love, pave the road in this intense emotional and human comedy about becoming a true boss of family and enterprise facing a world of unforgiving commerce. Allies become adversaries and adversaries become allies, both inside and outside the family, as Joy's inner life and fierce imagination carry her through the storm she faces. Jennifer Lawrence stars, with Robert De Niro, Bradley Cooper, Edgar Ramirez, Isabella Rossellini, Diane Ladd, and Virginia Madsen. Like David O. Russell's previous films, Joy defies genre to tell a story of family, loyalty, and love. (C) Fox

Will Lebow
as Monsignor

Matthew Russell
as Roger from Wardrobe

Jennifer Lawrence’s 10 Best Movies
How Family-Friendly is Captain America: Civil War?
On DVD This Week: Joy, The 5th Wave, The Choice, and More

Joy pursues a number of ill-fitting narrative detours that detract from the fascinating story that should be at the core of the movie. While I was rooting for the film-and for Joy herself - ultimately it felt like the film missed a key opportunity.

This optimistic, often amusing story is a Lawrence show all the way as she flies the flag for feminism, entrepreneurship and family without missing a beat.

Oh Mr. Russell, you're nothing if not predictable.

I love the expedition that this wonderfully complex heroine is on, watching her use her intelligence to get what she wants out of life is gloriously gratifying.

I am a huge Jennifer Lawrence fan -- I think she is an intuitive and smart actress -- and it's great that she's been given a part this meaty to sink her teeth into. And I get why Russell cast her... But boy oh boy, is she miscast.

It's a messy script, even by Russell's own lax standards; characters disappear for huge swaths of the narrative, story strands don't pay off, and big emotional beats are so overcooked they smoke up the screen.

Joy as a film is as much of a mess as the one being mopped up but Jennifer Lawrence does a great job of keeping the audience rooting for Joy all the way...

Lawrence does the best with what she is given, and her penultimate scene shows a good deal of strength and power, but Russell's messy movie ultimately lets her down.

Why is Russell perpetuating fantasies in Joy as harmful as those about winning the lottery or inheriting wealth from "some unknown relative"?

A success story whose fast-paced joyfulness in performance and pacing makes up for the bumpy execution.

Joy is a mess, sometimes intentionally so and oftentimes not.

Mike Massie
Gone With The Twins
View All Critic Reviews (274)

Russell tries so hard to lampshade the blatant artificiality (typical of a soap opera) found in this absurd, unbelievable story (based very slightly on true events) that the result is, well, pretty hard to buy and to be engaged with, even if it is enjoyable and mostly refreshing to watch.

Neither all-wet, nor joyful, "Joy" is an interesting cinematic confection. Worthwhile, but derivative -- much like Joy's mop.

The inventor of the Miracle Mop builds a business dynasty despite the obstruction of her family. Aside from a few gems, I've often found David O. Russell's accolades to be much ado about nothing, and what is true about most of his films is doubly true about this one. It's a disjointed story, with a ton of "tell" dialogue emphasizing just how awful Joy's family is, and the filmmaking is conspicuously absent of energy. For example, when Neil Walker is showing Joy the ropes, Bradley Cooper delivers the dialogue like he's in a trance, and the tracking shot is as static as any moving shot could be. Now imagine if Danny Boyle was directing an Aaron Sorkin script; what rapid-fire kick-assery would that have been. Also, the sound editing and direction was like the proverbial thumb in the frame. There were whole lines of dialogue that were clearly added in post - like fucking amateur hour nominated for awards. Overall, I don't understand why anybody like David O. Russell (outside of The Fighter, which is excellent).

Jennifer Lawrence was nominated for a Best Actress Oscar for yet another David O. Russell flick, but this time, I gotta say I'm mopping up what she's spilling. JLaw plays Joy Mangano, inventor of the Miracle Mop, with the good ol' spirit and guts we saw in "Winter's Bone," but tempered by even more smoky-voiced weariness and middle class ennui. Her resting face is just so eminently watchable with flickers of masked annoyance, seething fury, and hushed tenacity. I think that's why I didn't love her in "Silver Linings Playbook" or "American Hustle." She had to move her face too much, and it came off as inorganically manic or too young compared to her castmates, but here, she maturely commands the screen despite being much younger than the original figure. This is her story, with liberties taken from the source, but nevertheless, a compelling underdog tale of ingenuity and individualism, good business and bad blood. David O. Russell certainly deserves credit for toning down his usual flashy zooms and nostalgic soundtracks in favor of just telling a straight story. The expository narration and frost-edged childhood dreams are quaintly hokey, but when we see adult Joy stuck in a rut of caring for her rowdy kids, sweet but aimless ex-husband, and delusional parents, we can experience the full disappointment that she and friend Jackie feel of "how did we get here?" I also enjoyed the recurring juxtaposition of Joy's uphill battle with the glitzy and glam soap opera to which her agoraphobic mother, Terry, vicariously cleaves - holding the paper tiger sort of "daring woman" mentioned in the epigraph up against the real deal (or perhaps just the opposite: actually tearing down the traditional stereotypes of soap operas as melodramatic and feminine and reclaiming female agency, as argued in Ryan C. Shower's "The Case for Joy" http://www.awardsdaily.com/2015/12/30/the-case-for-joy/). There's also a cute little nod to the provenance of David O. Russell's middle initial with the upward mobility anecdote about how David O. Selznick, "son of immigrants," went on to marry Jennifer Jones. (Selznick's middle initial was an arbitrary choice, and Russell picked his as an homage.) The cast of supporting characters is also eccentric and diverse. Joy's father, Rudy, is that particular brand of loving but patriarchal, well-meaning but impotent man's man, and his line about how he shouldn't have encouraged Joy to follow her dreams, which seemingly blames himself but actually blames an uppity woman, is infuriatingly characteristic. His new squeeze, Trudy, is an Italian socialite who plays businesswoman but is not as shrewd as she is domineering. Despite these toxic influences in her life, Joy does have supportive relationships with her best friend played by Dascha Polanco and her crooner ex played by Edgar Ramirez, the latter of whom helps showcase JLaw's singing voice and Spanish skills. A little bit of French is also thrown in when Terry emerges from her bedroom with some charming persuasion from the Haitian plumber played by Jimmy Jean-Louis (of "Heroes"!). Now apparently, Joy Mangano's real-life journey is not as conflict-filled as the fictionalized account, but having screen Joy muck through so much denigrating sexism, professional misconduct, and blatant unconcern really earns her the badass, albeit clichéd, black-leather-clad moment of chopping her hair off and strutting up to get what's hers.