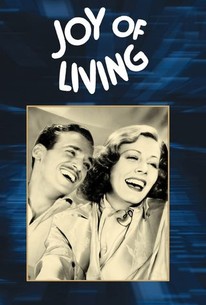 Given the talent involved, The Joy of Living should have been far better than it is. Irene Dunne plays Maggie, a popular musical-comedy star saddled with a possessive, spendthrift family. Maggie would like to leave the house once in a while and experience "real life," but her parents (Alice Brady, Guy Kibbee), worried that they'll lose their meal ticket, refuse to allow her to do so. The Prince Charming who rescues Maggie from her folks is ship-owner Dan (Douglas Fairbanks Jr.) As a bonus, the footloose and fancy-free Dan teaches the repressed Maggie that "it's fun to be foolish." Apparently director Tay Garnett couldn't keep the production under control, and the cost ballooned to a then-staggering $1.1 million, resulting in a huge loss for RKO Radio. Some of the film's brighter moments are provided by Lucille Ball, Billy Gilbert, Jean Dixon and Franklin Pangborn, who like Dunne and Fairbanks all deserved funnier material than this.

Critic Reviews for Joy of Living

If Joy of Living doesn't seem quite as spontaneous as The Awful Truth, it's probably just because it came later in the cycle. On its own merits, it's lively entertainment.

Audience Reviews for Joy of Living

There are no featured audience reviews yet. Click the link below to see what others say about Joy of Living!