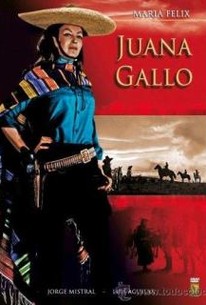 This is a dramatic, entertaining, and largely fictional interpretation of a very non-fictional event and a real set of characters in the Mexican Revolution. The heroine, Juana Gallo is portrayed by one of Mexico's most famous female leads, María Felix. Gallo was born and raised in the state of Zapatecas, and after the man she loves is killed during the Revolution, her anger leads her to fight alongside the men from her region. Joining her in battle are a noble career military man (Jorge Mistral), a lowly, impoverished fellow (Luis Aguilar), and a humble campesino (Ignacio Lopez-Tarso). Gallo and her compatriots are headed for the climactic battle of Zacatecas, a heroic struggle that is written large across the pages of Mexican history. The actual Juana Gallo died in poverty in 1959. ~ Eleanor Mannikka, Rovi

There are no critic reviews yet for Juana Gallo. Keep checking Rotten Tomatoes for updates!

There are no featured reviews for Juana Gallo at this time.