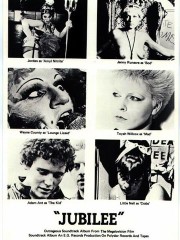 Scott S
February 5, 2019
My first Derek Jarman film and blown away by the artistic aesthetic of Jubilee from it's satire to its fashion.

Peter F
½ September 21, 2016
Derek Jarman's bizarre dystopian comedy still feels eons ahead of its time, even if it's quite possibly the most punk-rock movie ever made. Seemingly including all of the filmmaker's interests (i.e. Shakespeare, sexuality, the 70s punk movement), Jubilee is absolutely a vanity project, but it's fascinating in a way that keeps it from being esoteric. The scenes and characters are always imaginative, and the philosophical dialogue is playful rather than preachy. While shot on an extremely small budget, Jarman still impressively captures a post-apocalyptic London (albeit one that appears to have a modicum of electric power), and it's a good bet to ascertain that Blade Runner might have taken a bit of its look from this movie. Punk fans are likely to get the most from this movie (the cast is basically a who's-who of icons from the era), and the story dissipates in a not fully forgivable fashion, but Jubilee's place in cult cinema should not be ignored by any cinephile.

Joe M
July 16, 2016
A pretentious mish-mash that is rather dated. Fast forwarded through most of it. Not worth the bother.

Anonymous User
½ December 12, 2015
Jubilee is a postmodern look at 1970s England, Jarman imagining a universe where those of the underground have taken over and left the world in ruin. Queen Elizabeth I is transported to this period by a spiritual being who shows her that England as she knows it is gone, and that the survivors are ballet dancers and punk rockers who flit around in the burning remnants of its historical and cultural influences. A gang of these people work together in a musical group, powerful women who use men as sexual objects before offing them and pal around with a couple of incestuous brothers, all while railing against any sort of established set of mores while simultaneously trying to achieve stardom.

This sounds completely insane, and it is, but that insanity is put to good use. Jubilee satirizes British power structures and cultural hierarchies (the media, the aristocracy, the military, the police) and operates as a tribute to the underground and anti-establishment nature of punk rock and of the oppressed minorities who contribute to the genre. More than anything, it captures the essence of this lifestyle, featuring a few of its actual members (including Jayne County, the first of rock's transgender singers). It's gorgeous, but the movement doesn't get off without Jarman pointing out their own racial ignorances and the hypocrisy of those who eventually sign on to major labels to the tune of millions while simultaneously decrying the wealthy and powerful.

I didn't watch this immediately after Haynes' Velvet Goldmine (another look at one of Britain's outsider-turned-mainstream rock genres) knowing that they'd be so similar, and while it pains me to compare two visionaries with such distinct concepts of their respective subjects, I have to say that Jarman's depiction is ultimately the better film. It captures the spirit of the punk lifestyle without stylish camera tricks, without a big budget (Jarman apparently had to starve himself to get this thing finished), and without sacrificing a tight narrative for the sake of visual ambition.

Michael T
June 7, 2014
One of the most accessible of Jarman's films; surreal and audacious, with Jordan's "Rule Britannia" a highlight.

Greg W
January 17, 2014
flawed but still worth a look at late '70's UK besides any pic that can reference Shakespeare and Siouxsie and the Banshees can't be bad right?

Intriguing without being compelling, Jubilee showcases derelict England and punk culture. It's best viewed as a sequence of vignettes, linked by recurring characters. Attempting to find a typical plot arc will yield disappointment.

It's a film that holds the viewer at arm's length, yet still manages to reveal a variety of interesting characters. The scenarios aren't too interesting by themselves, but become relatively engaging by the way characters interact.

It's still a film you have to work to like, but some excellent musical showcases do a good job of helping to smooth the ride.

Super Reviewer
Bruce B
September 30, 2013
This must be my week of crap movies, I'm going to be honest right from the start: I've only seen two films from the late Derek Jarman, this and The Last of England (1987). And I must say that neither of them made much of an impression on me. Jubilee tells the disjointed story of Queen Elizabeth I, who bored by her own existence has her court astrologer and an angel invent a time travel devise that will allow her to travel forward to twentieth century Britain. Once again Jarman revels in pointing out the failings in modern British culture, from the violent punk scene that the main characters are part of, to the harsh severity of the music industry and corporate big business. This has no precedence over the plot, because Jubilee has no plot, just a rambling incoherent mish-mash of filth and vulgarity, which Jarman seems to think will help drive his message of a Britain on the brink of self-destruction home. Jubilee is a film that so obviously wanted to be hip it hurts, looking back it seems Jarman took everything that was just about to explode into the public conscious and structured a highly self-indulgent story around it. So we are shown one of the most miss-representative looks at punk one could ever imagine, and a cast that reads like the who's-who of seventies underground celebrities (Richard O Brien rubs shoulders with the likes of a chubby Toyah Wilcox and a pre-fame Adam Ant). Jarman was clearly pandering to his overly inflated ego, after his gay swords and sandals "epic" Sebastiane (1976) was hailed a modern classic. Jubilee is yet another product of art-house cinema gone wrong and film-making in it's most brash and unsubtle form. 1 Star 9-29-13

Leah T
½ August 10, 2013
I enjoyed this, even if it was rather disjointed and directionless.

Super Reviewer
Alec B
½ April 27, 2013
Its more graduate school thesis than an actual film. Is it original? Yes, but its still mostly just a collection of images and ideas without much of a through-line.

Andy F
January 28, 2013
A brutal and staggering portrait of an alternative 1970s Britain where anarchy reigns and society has all but broken down. A mad tale more than worthy because of the inclusion of punk icons Jordan, Adam Ant, Wayne County etc.

Branden W
November 9, 2012
A true work of art. This strange experimental film is more like a painting than a film. Think Alejandro Jodorowsky gone post-punk. Experimental post-modern philosophical mind-fuck madness, 1970's British post-punk fashion, staged in post-apocalyptic hallucinatory settings. This film will forever influence my thinking as an experimental artist, as Derek Jarman has pushed boundaries into an abyss of newly found territory. Jarman has also worked with experimental musicians Throbbing Gristle on a super-8 project entitled 'In the Shadow of the Sun', and has been pushing boundaries long before 'experimental' became an entity of its own. One of the greatest filmmakers of the genre.

Zack B
September 21, 2012
I was excited about the concept of Elizabeth I getting a glimpse of the future of England with the help of John Dee, but I was let down by the rest of the movie, which was all over the place and unfocused. I don't have a problem with bizarre or weird characters or scenes, unless of course it's done like it is in this movie, where nothing is really happening in spite of the fact that a lot is happening.

Tolga D
½ March 3, 2012
Wow! What a didactic and boring piece of crap! There's no storyline, no plot, no acting, nothing. Even its absurdity doesn't help to make it better. Grotesque!

Super Reviewer
Eric B
January 29, 2012
Interesting if flawed, "Jubilee" is director Derek Jarman's arty look at UK punks and urban decay. His detached stance seems somewhat ambivalent -- does he regard these flamboyant brats as an antidote to modern society or a mere symptom of it?

With its day-glo characters and derelict locations, the film isn't out to create a realistic, metropolitan environment -- often, the actors just recite history or philosophy for the camera and serve as conduits for Jarman's thoughts. What passes for "plot" is strictly secondary, as various play-like vignettes are spliced together in collage. The motley cast includes the adolescent Toyah Willcox (relentlessly obnoxious and barely recognizable), the pre-fame Adam Ant, Little Nell (yes, from "The Rocky Horror Picture Show"), Ian Charleson (half the film passed before I realized he starred in "Chariots of Fire" just a few years later) and Jenny Runacre (the group's aloof, glamorous matriarch). Willcox, Wayne County, Adam & the Ants (minus their later New Romantic frills) and Siouxsie & the Banshees are among the onscreen musical contributors, while Brian Eno adds ambient score. The Slits also make a quick cameo. Yet the centerpiece tune comes from a novice: the one-named Jordan (known here as "Amyl Nitrate"), who struts through sort of an operatic, reggae version of "Rule Brittania."

The abusive Willcox has the juiciest part, but the most coherent plot thread is the stardom quest of a handsome ingenue (Ant) and his subsequent exploitation by a leering media impresario (the ridiculously overacting "Orlando"). Elsewhere, the sociopathic Nell, Willcox and Runacre collaborate on a few thrill killings, while the depraved proceedings are coolly observed by a time-traveling Queen Elizabeth I (Runacre again), her court astrologer (Richard O'Brien, also from "Rocky Horror") and the spooky, dark-eyed angel they have summoned as a guide. This trio functions as a narrative frame and one suspects that, given a choice, Jarman would rather live in their past era of magic and elegant costumes.

Many British youths disliked "Jubilee" (punk-fashion icon Vivienne Westwood even ran off a notorious T-shirt decorated with a letter of protest) and it's easy to see why true rockers would prefer a grittier, grubbier work like, say, "Rude Boy." But "Jubilee" remains an intriguing curio that underground-music fans shouldn't miss.

Larry W
½ November 6, 2011
Derek Jarman's punk dystopia. What's not to love? (In retrospect, it could have done without Elizabeth I/Ariel, but at the time it was made that served to provide context.)

Mark H
November 5, 2011
Jubilee is an extremely trashy film with almost no storyline, a real mess at best. It's interesting at times, but nothing special.
Page 1 of 9