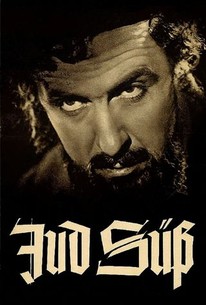 Leon Feuchtwangler's novel Jud Süss was originally about a powerful ghetto businessman who believes himself to be a Jew. Süss's ruthless business practices result in the betrayal of an innocent girl, for which he is arrested and sentenced to be hanged under the anti-Jewish laws of the 18th century. While he waits to be executed, Süss discovers he is not Jewish. Rather than turn his back on the people of the ghetto with whom he'd grown up, Süss courageously refuses to declare his "Aryan" status, even though it means he will die on the gallows. The Feuchtwangler book was designed in roundabout fashion to strike a blow against anti-Semitism. But when Jud Süss was filmed in Germany at the behest of Nazi propaganda minister Joseph Goebbels in 1940, its original message was twisted and perverted into an argument in favor of "ethnic cleansing." As played by Werner Krauss, Süss is not only genuinely Jewish, but also an amalgam of every vicious caricature ever concocted by the anti-Semitic propagandists of the past two centuries. With hooked nose and greasy beard, Krauss portrays Süss as a whining, wheedling, hand-wringing subhuman rapist; small wonder that Krauss was proclaimed an Actor of the State by the Nazis. The final scene of Jud Süss shows a screaming, protesting Süss being hanged in the public square; the scene is directed to cast Süss' tormenters in an utterly sympathetic light, and perhaps even to invoke cheers from an impressionable audience. Though disgusting beyond belief, Jud Süss should be seen at least once, if only to show what a dangerous weapon film can be in the hands of hate merchants.

One of the most vile films ever made.

There are no featured audience reviews yet. Click the link below to see what others say about Jud Suss!