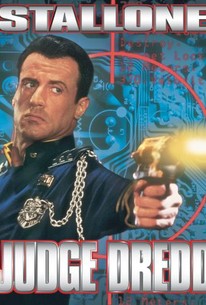 Critics Consensus: Judge Dredd wants to be both a legitimate violent action flick and a parody of one, but director Danny Cannon fails to find the necessary balance to make it work.

Critics Consensus: Judge Dredd wants to be both a legitimate violent action flick and a parody of one, but director Danny Cannon fails to find the necessary balance to make it work.

Critic Consensus: Judge Dredd wants to be both a legitimate violent action flick and a parody of one, but director Danny Cannon fails to find the necessary balance to make it work.

This action-filled sci-fi spectacle is set in a grim, futuristic world in which authoritarianism is the only way left to ensure democracy. The tale, based on a popular British comic book character, is set in the 22nd century after most of the Earth has become an uninhabitable desert wasteland. In North America, all of the people live in one of three giant cities. These cities are overpopulated and teetering on the brink of anarchy. Trying to maintain some semblance of order are the judges, lawmen riding air bikes, who mete out swift, and frequently fatal justice. The premiere judge of seething Mega-City, built atop the ruins of New York, is Dredd. His daily crime-busting routine is upset one day when the nefarious Rico breaks out of the high-security Aspen Penal Colony and returns to get revenge on the one who ratted on him; he also wants to make Mega-City an even more violent place. Upon his arrival, Rico immediately begins working to frame Dredd. He succeeds and the judge is imprisoned. Fortunately, the hero escapes and a spectacular and exciting battle between the judge and the evil Rico ensues.

Ashley Artus
as Squatter #1, Squatter No. 1

Christopher Glover
as Squatter #2, Squatter No. 2

The movie, by the end, practically seems intent on destroying itself.

Directed without inspiration by Danny Cannon from a stupid script by Michael De Luca, William Wisher, and Steven de Souza.

This slam-bang Stallone vehicle never quite delivers what its confident, fizzing visuals seem to promise.

Although it is full of noise and fake firepower, Dredd simply lies there on the screen until the final scenes.

Usually engaging and sympathetic, Stallone is blank and tongue-tied here, an immovable slab in the midst of 95 minutes of gunfire, explosions and Gothic excess.

...With a great aerial chase scene, lots of cool guns and gadgets, and a 30's serial mood, this Judge Dredd is above the law when it comes to mindless fun....

Accomplishes numerous visual feats, from the gruesome makeup effects for the denizens of the Cursed Earth to the flying car chases across the neon cityscapes.

As a piece of pure production, [Judge Dredd] needs to be heralded as one of the best achievements of the '90s. Everything about the film's texture is a resounding success.

What was once a satire on fascism looks like an apologia for it. That may be the inevitable price of turning a medium which is cheap and subversive into one that is expensively conformist.

It stands no chance of being mistaken for a good movie.

The worst I can say about this abrasive and loud sci-fi is that Rob Schneider is not the worst thing in it (and he tries to be ... as usual). Only for teenage boys.

Terribly acted. The script was mindlessly drafted. There's little of note in this film other than how "m'eh" it was.

silly and not quite consistent with the source material, but a ton of fun none the less. ive seen this film many times and i always enjoy it.

The filmmakers did a lot of over-thinking while producing "Judge Dredd," because the view of the film is interesting, but the writing, the plot, the characters, and the one-liners are so bland that it just becomes tiresome and boring, even though it is only 96 minutes. Stallone usually chooses great films to star in, which make him look better than he actually is, but this film is a new low for his career. Honestly, if you are looking for anything remotely enjoyable, you will not find it here, unless you are drunk. "Judge Dredd" is one of the worst attempts at an Action/Sci-Fi that I have seen in a long time, it's awful!