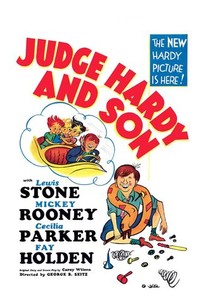 If Judge Hardy and Son had been filmed in the 1990s, it would have been titled Andy Hardy VII. In this latest edition of MGM's "Hardy Family" series, the kindly Judge (Lewis Stone) wrestles with two problems. He must rescue an elderly couple from eviction, and he must cope with his wife's (Fay Holden) life threatening illness. This time around, the romantic entanglements of son Andy Hardy (Mickey Rooney) take second place to Andy's anguish over his mother's condition. It needs hardly be said that Mom recovers and the family is happy again at fade-out time.

Joe Yule
as Munk
View All

Mickey Rooney need not have had two crying scenes. But the Hardys are still the most human people on the screen.

You can also see the jalopy humor becoming one of the defining elements of the Andy Hardy series here.

There are no featured reviews for Judge Hardy and Son at this time.