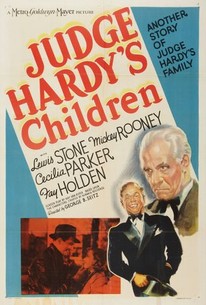 The Hardys are off to Washington DC in this third entry in MGM's "Hardy Family" series. Judge Hardy (Lewis Stone) has been appointed chairman of a special committee, and on occasion offers a subtly "liberal" political observation that the writers have slipped by MGM's ultra-conservative head man Louis B. Mayer. The Judge's daughter Marian (Cecilia Parker) is intoxicated by Washington's social life, while son Andy (Mickey Rooney) falls for a pretty daughter of a French diplomat. Thus, the Judge is obliged to juggle his committee duties with his efforts to keep his children from making fools of themselves.

There are no featured reviews for Judge Hardy's Children at this time.