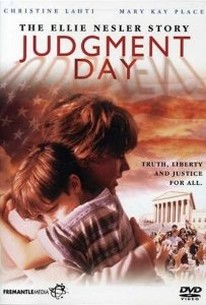 A real-life murder story that commanded headlines for several months in 1990 served as the basis for the tense but unsatisfying cable-TV movie Judgment Day: Ellie Nesler Story. Christine Lahti stars as Ellie Nesler, who cannot help but notice that her seven-year-old son Brandon (Andrew Ducote) has been sullen and withdrawn since returning from summer camp. Eventually it is revealed that Brandon had been sexually molested by camp counselor Daniel Driver (Robert Bockstael)--and that Driver has had a history of such repellant behavior, but has managed to remain out of prison thanks to the loopholes of the legal system. Driven over the edge when Driver beats the rap once more, Ellie confronts the man outside a courtroom and shoots him dead! The rest of the film recounts Ellie's murder trial, and the spectacular outpouring of public reaction--both pro and con--in its wake. Though it is uncompromising in detailing the long-range consequences of the actions by both Ellie Nesler and Daniel Driver, the film refuses to take a definite stance of its own in the controversy, and thus its dramatic impact is muted. Judgment Day: The Ellie Nesler Story made its USA cable network debut on June 23, 1999. ~ Hal Erickson, Rovi

There are no critic reviews yet for Judgment Day: The Ellie Nesler Story. Keep checking Rotten Tomatoes for updates!

There are no featured reviews for Judgment Day: The Ellie Nesler Story at this time.