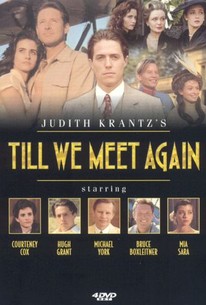 Originally titled Judith Krantz' Till We Meet Again, this two-part soaper covers forty-three years in the lives of three women. In 1913, French chanteuse Lucy Gutteridge embarks upon a successful showbiz career. She marries a champaigne heir and bears two daughters, played by Courtney Cox and Mia Sara. The story follows the trials and tribulations of mother and daughters through three wars and an infinite number of romances. A dash of adventure is provided by Courtney's activities as a stunt pilot, while there's glamour aplenty as Mia becomes a world-renowned movie star. The best scenes take place during World War 2, with the horrors of the battlefield running second place to the ladies' boudoir escapades. Barry Bostwick, who seems to have been in every Judith Krantz movie ever made (at least, that's what TV Guide told us back in 1989), costars as Courtney's erstwhile lover. Partly filmed in England, Till We Meet Again was first telecast November 19 and 21, 1989.

Critic Reviews for Judith Krantz's 'Till We Meet Again'

There are no critic reviews yet for Judith Krantz's 'Till We Meet Again'. Keep checking Rotten Tomatoes for updates!

There are no featured reviews for Judith Krantz's 'Till We Meet Again' at this time.