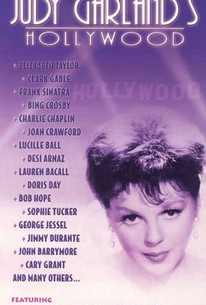 Though many fans will always fondly recall Judy Garland's wonderful portrayal of young Dorothy in The Wizard of Oz, Garland herself was apparently most proud of the role she played in A Star Is Born. In this film, which opened in 1954, Garland portrayed an actress who sees her career blossom as her husband's declines. This video features clips from the film's glamorous premiere held on September 29, 1954, at Hollywood's Pantages Theatre. Viewers will see a vast array of other stars arriving at this event that foreshadowed Garland's Academy Award nomination for this role. An added segment features Garland and Ken Murray, who was well-known for his "Hollywood Home Movies."

Judy Garland
as Host
View All

There are no critic reviews yet for Judy Garland's Hollywood. Keep checking Rotten Tomatoes for updates!

There are no featured reviews for Judy Garland's Hollywood at this time.