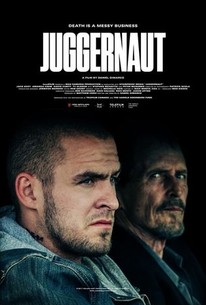 After discovering the news that his Mother has taken her life, Saxon Gamble returns home, irrationally plagued by the notion that her death was not a suicide. Saxon, a man of violence, embarks on a revenge mission that shakes up the quiet town of his birth. His quest also awakens a dormant sibling rivalry that puts himself and his brother (Dean) on a collision course with bloody consequences. Caught in the middle is their Father (Leonard), now a Minister, the return of Saxon sends him on a crisis of conscience. While he begins to examine his checkered past and lack the courage of his newly found convictions, his sons remain locked in a battle for his approval and affection. Juggernaut is a story of revenge, obsession and sibling rivalry. An exploration into the dark places family dysfunction can lead to.

Even if the ending falls something short of memorable, "Juggernaut" still holds attention as a strong, well-acted effort that effectively walks the line between dysfunctional family drama and revenge thriller.

DiMarco just can't sustain enough tension or drama to power the film through a plodding 105 minutes.

DiMarco's noir-inflected family drama is confident and mature, but less involving than it could be, because the filmmaker and his star make their anti-hero stubbornly unappealing.

Strong performances and atmosphere compensate for the cliched storyline.

Romantic misfires aside, Juggernaut operates as a slick little mystery fleshed out with some fine Canadian talent.

Every line reads as if it were still on the page; every characterization is one-dimensional and unbending. At 90 minutes, the stilted dialogue might feel like a deliberate, stylized choice; at nearly two hours, it's infuriating.

Juggernaut does not have the propulsive narrative force its title implies. You expect some sort of vigilante rumble like Walking Tall, but you get more of a morally ambiguous slow burn.

There are no featured audience reviews yet. Click the link below to see what others say about Juggernaut!