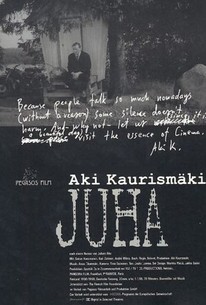 Aki Kaurismaki's Juha is the fourth adaptation of this love triangle involving a woman and two men. The original story took place in the 18th century and revolved around a former servant girl, Marja, who is married to plain, simple-minded and older Juha, but in love with Russian salesman and 'Casanova' Shemeikka. Kaurismaki's story is set in the late 1970's, shot silent and furnished with captions to disclose the dialogue. It is meant to be watched with live music, preferably with the score's composer Anssi Tikanmaki conducting his own orchestra. Absence of sound (dialogue) is not really new for Kaurismaki, whose 1990 masterpiece Tulitikkutehtaan tyttö/The Match Factory Girl took 17 minutes before a word was uttered. Instead of imitating silent movies, Kaurismaki placed his version of Juha at the moment of the history of silent film when some sound could be used. Acting style and images start somewhere in the late 1920's and towards the end slowly move into the '50's B-movie style. With Timo Salmien behind the lenses, who has been collaborating as cinematographer with Aki and brother Mika Kaurismaki since 1981, and some of the regular cast (such as André Wilms, Elina Salo, Sakari Kuosmanen and Kati Outinen), Juha is distinctively a Kaurismaki film. Published in 1911, well-known Finnish author Juhani Aho's tragic drama has been filmed three times before. The first was Johan in 1920 by Mauritz Stiller, who staged it in provincial Sweden (which was a strange locale for the Finnish audiences). The second, Juha, was brought to screen in 1937 by Nyrki Tapiovaara, who was faithful to the script, but the film was not very successful. The third Juha was by Toivo Sarkka in 1956, and it was also the first Finnish film shot in color. It was the worst of the three, according to film historians, looking like a picture postcard; nevertheless, it was a big box-office hit.

For true Kaurismakian austerity, the film to see is the singular Juha, which dispenses with dialogue altogether.

I can appreciate Kaurismäki's love for the silent medium, but I think it may truly be a lost art.

There are no featured audience reviews yet. Click the link below to see what others say about Juha!