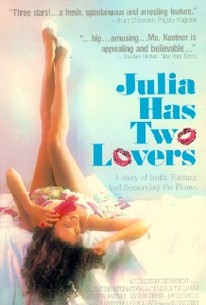 Much of this off-beat comedy-drama takes place on the telephone as it tells the story of a writer of children's books who finds herself unable to decide whether she is more interested in her ordinary fiance, or the wrong number she has become involved with. It all starts when Daniel, the stranger, accidentally dials her line. Something clicks between the two and a long, increasingly intimate conversation ensues in which she expresses her doubts about marrying Jack, the man she lives with. Daniel strongly advises her to not marry him. Later that day, he ends up accepting her invitation and coming over for an afternoon tryst. The following day, she learns a disturbing truth about Daniel.

C.H. Lehenhof
as Repairman
View All

There are no critic reviews yet for Julia Has Two Lovers. Keep checking Rotten Tomatoes for updates!

There are no featured reviews for Julia Has Two Lovers at this time.