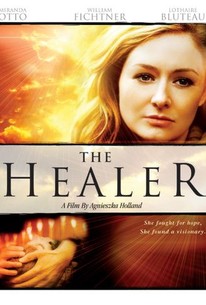 Faith, family, and devotion are all explored in Polish director Agnieszka Holland's intense family drama. Julie (Miranda Otto) and her twin children, Nick (Ryan Smith) and Nicole (Bianca Crudo), cut short a ski outing due to Nick suddenly taking ill. As they arrive back at home, Julie catches her husband, Henry (William Fichtner), with another woman and promptly moves to end their marriage. Meanwhile, Nick has another spell similar to the first one and doctors discover a tumor in his brain. Further complicating matters is Nick's allergy to the necessary chemotherapy drugs, which prompts Julie to abandon traditional medicine and seek out a Polish healer named Alexei Ormow (Lothaire Bluteau). As the healer begins making progress on the youngster, Alexei and Julie begin to fall in love with each other -- a development that greatly troubles Julie as she struggles to determine how to proceed in the best interests of her family. In 2002, Julie Walking Home (aka The Healer) was selected for inclusion in the Venice Film Festival.

Ryan Smith
as Nick
View All

Where Holland falters is in bringing the movie to a satisfying conclusion.

It doesn't work, but Otto performs heroically, sustaining the character of Julie to the movie's final moments.

a tragic (in both senses of the word) missed opportunity.

At the halfway stage I was convinced I was watching a film that would blow audiences away, but it just couldn't hold things at that standard for the full running time.

An unmoving, cold affair of the heart.

Promising film with one of those empty endings...